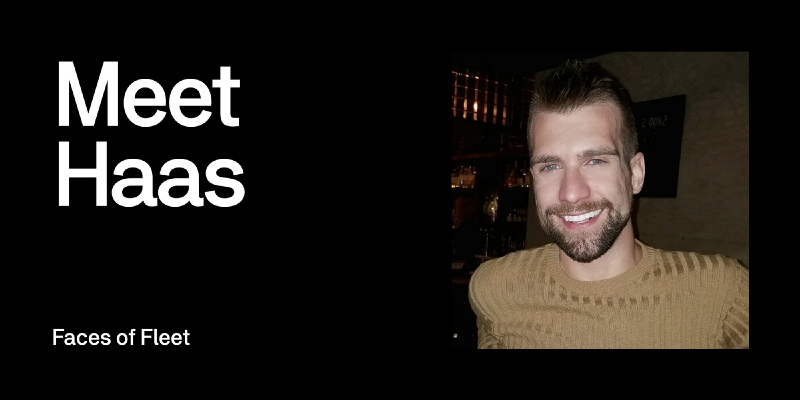 Haas had never lived outside of East Tennessee, but on July 4, 2018, he made the big move to Los Angeles. He moved to LA as part of his journey to discover his best authentic self, and to help others do the same.

“My decision to leave East TN, the only place I had ever lived is a lot like jumping into a very cold river. The Smoky Mountain rivers I grew up swimming in are always freezing, no matter the season,” Haas says.

“It’s so cold that it would keep most from even attempting to dive in, but if you can muster up the gumption to just do it, it’s going to hurt. It’s going to be shocking and so hard to catch your breath. Then, once you’ve warmed up to it, you realize how much fun you are having and see the adventures downstream to share with the others brave enough who went before you, then if you’d just stayed up there on the river bank watching everyone else.”

Haas is unapologetically himself. He came out at the age of 14 and was the 1st male on his high school cheer squad. As a gay man, he didn’t feel that he could be himself in East Tenessee, so Haas brought his southern small-town values with him to a big ol’ city full of opportunity.

“I can’t believe that I did this — two years ago, I would never have believed it. I want to let others know that their dreams can be reached despite whatever their financial situation is. Moving from a rural part of the country to downtown Los Angeles and adjusting to the cost of living was something I had much anxiety over. How I would make ends meet? With hard work and dedication, I have been able to live right in the heart of the city and thrive.”

Haas keeps busy, to say the least. He is the Business Development Manager of CheerGuruNation and a cheerleading coach at Beverly Hills High School. He began his cheerleading career in high school and has been competing, tumbling and coaching ever since.

Haas also works in the historic Grand Central Market in Downtown LA and KJs an LBGTQA+ bar and nightclub in Long Beach. Haas loves to sing and dazzle the audience on the regular with country tunes by Josh Turner and George Jones. In his downtime, he enjoys quality time with his Yorkie Schnauzer named Bronx.

Haas is an amazing reminder of the power and potential in making a change and taking a leap of faith.