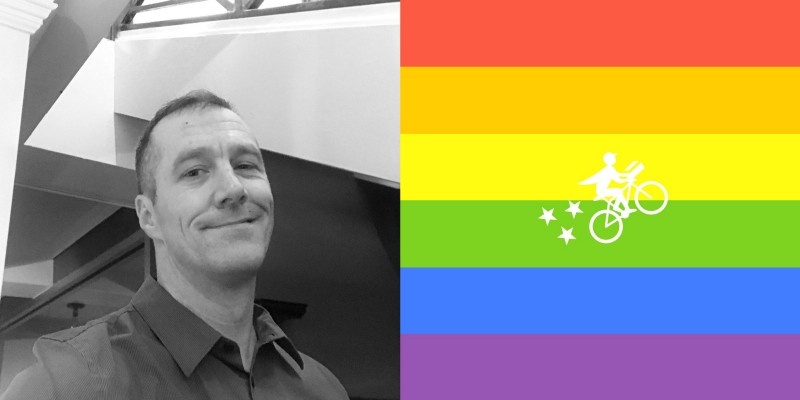 This is the third installment in a 12-part series where we uncover the stories of the people behind your deliveries.

Remember when Girl Talk flawlessly created techno mash-ups of all of the best parts of your favorite songs — somehow mixing Jimi Hendrix and Missy Elliot on the same track… and it blew your mind because you had no idea that was even possible?

This New York-based Postmate is your therapist, best friend from 3rd grade, brother, and hairstylist — all wrapped into a single human. And if your interactions with John are anything like ours, you will probably find yourself inviting him over for drinks within 30 seconds of meeting. Casual drinks will then evolve into you asking him to be the best man at your wedding, even though you have 2 brothers because well… he’ll soon feel like family.

Prior to becoming a Postmate in 2015 he graduated from Georgetown, earned 2 Masters degrees, taught 4th grade at a school that served DC’s most under resourced children, was captain of the first all gay men’s Rugby team, and worked as a case manager at a shelter that housed children who had been removed from their homes for various reasons.

“I’m a big fan of the underdog” — A sentiment that comes across loud and clear when this self described renaissance man looks back on the various roles he’s played over the years — particularly any time he speaks about his time spent teaching, where his favorite students were often the ones who came from the most broken environments.

When life deals you a tough hand, there are two paths forward — become bitter from those experiences, or learn something from them. John falls into the latter camp. While earning his Master’s from The University of Manchester, John permanently lost about 60% of his hearing within a 24 hour period.

True to form, John dug deep and turned one of the darkest seasons of his life into a lesson in perseverance and empathy.

“When you are having one of those days where you don’t feel or look right and don’t want to face the world, go out anyway and look for the smile that you will inevitably get from a stranger. Stay out there until you see it. It will be a smile that may be kind or one of understanding and compassion from someone who has been there. When you see it, let it make you feel better. And once it does, look for the person who feels like you did before…and when you do, smile to them the same way.”

Thank you John for being you.