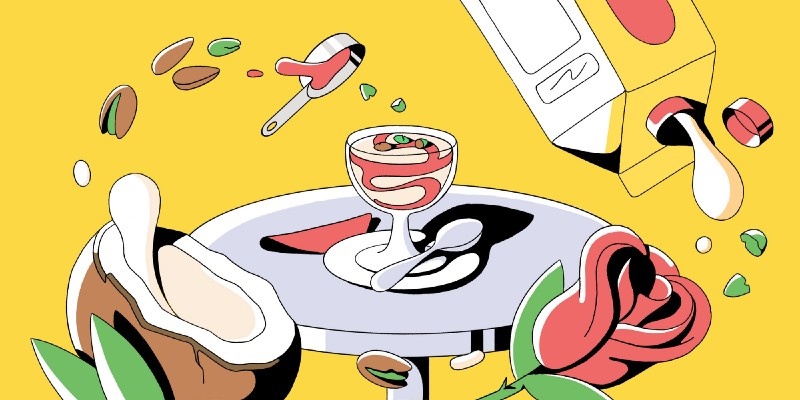 If You’re Eating Middle Eastern, Save Room for Dessert

If You’re Eating Middle Eastern, Save Room for Dessert

Americans are accepting that dessert should never be an afterthought, as evidenced by the boom in artisanal ice cream spots and upscale chocolate retail. But in the Middle East, dessert has always been just as important as the savory section, which is why at Los Angeles’s swarm of new-school Middle Eastern spots, you’re making a big mistake if you pass on the final course.

One of Israel’s most prevalent desserts is malabi, a creamy pudding often made with nut milk to ensure it meets Kosher restrictions. It was a staple of childhood in Israel for chef Lior Hillel, whose Glendale restaurant Bacari GDL serves a traditional version of the dish.

“My dad used to take us when we were kids to a place on the way to the Ben Gurion airport, and this guy worked out of an old-school hippie Volkswagen truck, selling malabi. I remember the flavor, and I remember Eucalyptus trees,” he says.

Hillel’s father died in 2009; the chef decided to pay tribute to him by replicating the flavors of the dish. “[After perfecting the recipe], I drove to my brother’s in Northridge. I did not say a word. I just gave him a spoonful: ’try this.’ That’s all I said. So, he has one bite, finished up, takes another one, finishes another one, and then, he looks at me with a big smile on his face, and he says, “Hey, do you remember when dad used to take us to the airport? This reminds me [of those malabis] — it tastes just the same. And that’s when I started crying.”

He continues, “I did not say a word. He just filled up all the blanks that I’ve had and that memory was one of the moments in my cooking career. It had so much attached to that. For me, it means a lot.”

Hillel’s not the only one in LA serving the treat. The Mediterranean-inspired Westside hideaway Neighbor has a rice pudding with pistachios that is reminiscent of malabi, and Jaffa — one of the newest Israeli-influenced spots in town — serves a version that breaks from tradition. “The opportunities we had to taste malabi in Israel were all vegan, so they make them with a non-dairy milk,” says Nancy Vrancovic, Jaffa’s operating partner. “They were a little bit on the thin side for us, texture-wise. We use dairy milk, so ours is thicker and creamier — a little more like an Italian panna cotta.”

The menu also includes hamantaschen, a triangle-shaped cookie stuffed with fruit jams that can include apricot and fig. While the dessert is part of the celebration of the Jewish holiday Purim, Jaffa serves it year-round, with the featured fruit changing with the season. The Atwater location of modern Mediterranean favorite Momed serves a version of the rosewater-loaded Basbousa semolina cake, which is traditionally served in Israel and Iran during the most holy days of the year.

“We thought about [whether to serve it year-round], and we do have a good generation of people from Israel and the Middle East that do dine with us, and it has struck a chord here in Atwater,” says Easan Mackani, Momed’s general manager. “It takes people back [to their countries of origin] sometimes when they try it, because they might not see it at every restaurant that they go to.”

Thanks to the similarity in climate, Los Angeles has proven ideal for sourcing the ingredients needed to make these desserts. The produce can be used to recreate the flavors that are native to the region. “Being where we are, you find a really similar range of ingredients,” says Chef Alex Chang, of Downtown’s Israeli-inspired Exchange LA, whose dessert options range from date-laden biscuits to an all-vegan and gluten-free malabi-style custard to a baclava-crumb-topped olive oil cake. “When I went to the market in Tel Aviv, I found all the best stuff — dried apricots, figs, and dates — that are so present in their desserts. We have [those ingredients as well], and they’re amazing here in LA.”

Some of these desserts offer up a new school version of an old world treat. Some hew to tradition in a way that’s evocative of someone’s long lost childhood. But as all desserts, the bottom line is whether or not it hits the spot. “This one woman came to me — her husband was sitting right next to her — and she said [after eating my malabi] ‘I was having sex with you through the food,’” Bacari GDL chef Hillel says, clearly both proud and embarrassed. “It’s just simple. People will always go back to the primal.”

If you’re looking to venture into Israeli inspired desserts, you’ll be happy to know that you can skip the wait and postmate Bacari GDL straight to your door.