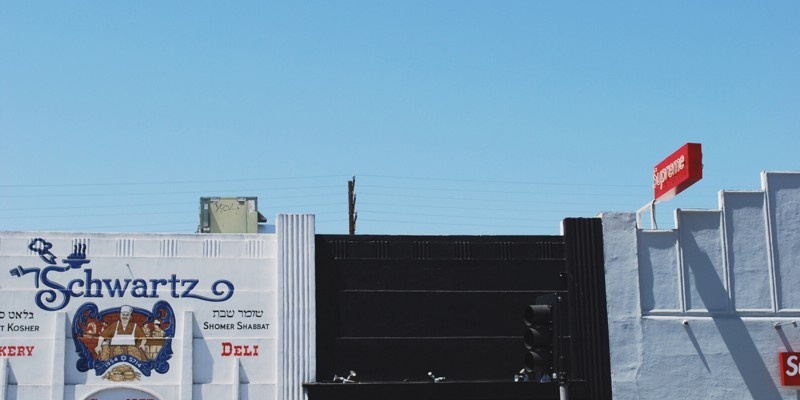 The block of Fairfax Avenue between Melrose Avenue and Beverly Boulevard is one of those iconic stretches in Los Angeles where old and new storefronts and cultures collide. Before we dive into the history of what makes Fairfax one of the most talked about streets, keep in mind that you can postmate some of the best spots on Fairfax — including Cofax, Schwartz Bakery, and Plan Check.

At first glance, the stretch of Fairfax Avenue in Los Angeles between Melrose Avenue and Beverly Boulevard is an unassuming couple of blocks: a bank here, a high school across the street. But it’s one of those pockets of Los Angeles where old and new mesh into a bizarre, vibrant patchwork of different cultures and generations.

Fairfax has long been a center of Jewish life in Los Angeles. There are storefronts with dizzying amounts of Judaica for sale and kosher meat markets with consistent clientele. The Schwartz Bakery, which was established in 1954, is the oldest kosher bakery in the city. But around 2004, the neighborhood’s image began to shift. That was the year that streetwear brand Supreme moved onto the block and the lines of people waiting for drops on Fairfax have become synonymous with this frantic and flashy clothing subculture. But it was 2010’s meteoric rise of the rap collective Odd Future, whose members could be seen skateboarding up and down the street, that turned “Fairfax” into shorthand for a certain set of fashionable teens — and earned it a worldwide reputation. When Odd Future opened a store at 410 N Fairfax, it was a seismic event, driving tourism and endless hype on Instagram. The store has since relocated to 350 N Fairfax, and its broad yellow outside wall with “GOLF” — a variation on the group’s nickname Golf Wang — in bold black letters has become a must-Gram opportunity for fans.

The previous location of the Odd Future store most recently served as a pop-up shop for Atlanta rapper Future, showing just how much of a destination Fairfax has become for those at the intersection of hip-hop and fashion. It’s the epicenter of streetwear on the West coast. As a longtime employee at Diamond Supply puts it: “That’s the bread and butter of this block: out of towners.” While on Sunday there’s plenty of foot traffic from the Melrose Trading Post — an open-air market that takes over the Fairfax High School parking lot once every week — the other six days are dominated by those who have made the trek from miles, states, or countries away. On any given day, you can see sidewalk lines of eager kids waiting to get into one of the handful of clothing stores that double as hangouts and skateparks. And the number of storefronts without names has skyrocketed as that sort of in-the-know exclusivity has become a common language.

All this could, in theory, be a major obstacle to securing a good pastrami on rye at Canter’s Deli. And this strange cultural collision has required some shrewd adjustments from local businesses. “It used to be a Jewish ghetto, Fairfax — you know that?” asks the owner of Solomon’s Judaica, which has a “RECORDS” sign left over from its days as a music store. “My father was here 35 years ago. After Supreme moved to the street, step by step, everything started changing.” He says there was a little friction at first. “An old lady wants to come buy a mezuzah and she sees kids smoking, hears the tap-tap of the skateboards. But you have to adjust — sell more jewelry, the stuff that kids like,” he says, shrugging. Today you can still come through Solomon’s to buy a mezuzah, but you can also grab a gold chain with a weed leaf pendant.

The district has also continued to innovate when it comes to food and hospitality. Just four years old, Cofax Coffee has already become a mandatory stop on any survey of the city’s legendary breakfast burrito scene. Plan Check Kitchen + Bar, which will unnerve and then (hopefully) enthrall diners with its burgers’ ketchup leather, is a warm, rustic respite. Edwin, a manager at Plan Check, says that despite the trendiness of the area, there’s remarkably little in the way of high-strung complaining from customers: “It’s always been the most chill clientele.” And the strip’s best kept secret is The Dime, a delightfully cramped bar which on any given night is playing the best hip-hop mix in all of Los Angeles.

This is not the first time Fairfax has been a see-and-be-seen district for the culturally fluent. On the Southeast corner of Fairfax and Beverly is a massive CBS television studio; in the ’50s, ’60s, and ’70s, it was common for celebrities to spill over from there to bars and hangouts up the street. (Anecdotally, it’s still possible to catch famous actor-slash-rappers picking up massive boxes of black-and-white cookies, presumably for filming crews, at vampiric hours.) That CBS studio is a comic reminder that in LA, disparate groups, cultures, and classes often exist within close proximity. There are obvious tensions that result from this, from the economic stratification that runs so rampant to the proverbial starving artists struggling to keep the lights on. Old ethnic enclaves get wiped out in favor of luxury condos. Fairfax, though, is unique not only for its various eras coexisting with one another, but for the supremely laid-back atmosphere that’s been created from the unlikely convergence.

To get a taste of Fairfax first hand, without leaving your couch, may we suggest you postmate it from Cofax, Schwartz Bakery, or Plan Check.