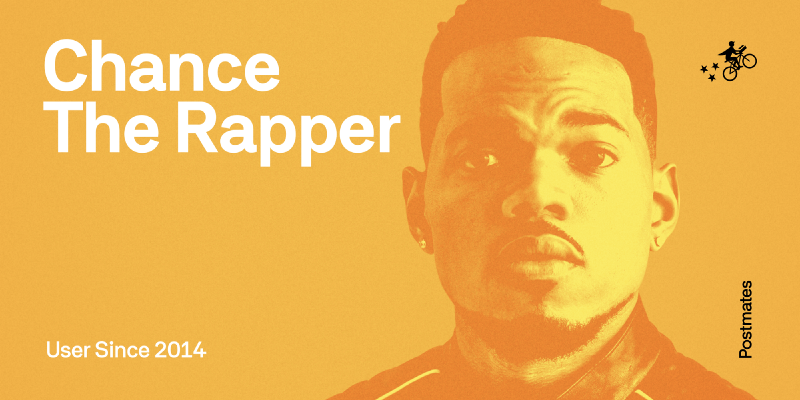 The Receipt: Chance The Rapper

When you’re a songwriter, activist, father, and actor, there isn’t a lot of time for — well anything. Especially when you’ve just dropped a brand-spanking-new album. That’s right, this is the year Chance comes for the crown. The Big Day is out today, and we’re ready to get down to it in our latest edition of The Receipt, featuring Chance The Rapper.

Chance calls Chicago home, and placed his first Postmates order on March 4, 2015 at 5pm. He postmated chicken wings with lemon pepper and hot sauce and a side of mild sauce from Harold’s Chicken Shack.

Turns out that Chance loves a Big Mac just as much as the rest of us — and he keeps his manners in check. Check out this custom order from Mickey D’s on February 24, 2016 at 10pm:

“*Please read carefully* Big Mac Meal with cheese only, as well as lettuce and extra cheese, (should be two slices of American cheese and only cheese and lettuce). Large Fries and a Sprite for the drink, thanks!”

Extra cheese, please and thank you. A musical genius who sees the value in using manners is one we can get behind.

Every artist needs a creative outlet — Chance is no different. On April 23, 2016, less than a month before Coloring Book was released, he purchased ‘Sweary Coloring Book: Coloring Books For Adults’ for research. Chance was prepping for the album, as well as Magnificent Coloring World, a pop-up immersive experience he and his team put together for fans in 2016.

When he’s not writing an album, touring or otherwise working hard, Chance likes to spend his time by the pool, catching rays, while also staying sun-safe. Chance placed an order from Macy's in LA on March 15th, 2015 for a pair of Medium Black Shorts, XXL Black Shorts, and Sunscreen SPF 30+.

He placed a similar custom order on March 4th, 2019 from Ralph Lauren in Chicago. Check it out:

We love a man with classic taste in color, swimwear and sun-savvy smarts.

Chance is an equal opportunity gamer and can often be found putting down the controller in exchange for some dice or cards. For a pre-Grammys party he threw on February 10, 2017, he had a Postmate pick up “the best games for a party,” including Uno, Connect-Four, and Twister.

How dedicated are you to your local? Chance’s commitment to Portillo’s Hot Dogs in Chicago is unmatched, ordering once every two days between December 2015 and January 2016.

His #1 order is a Portillo’s classic: french fries, a burger, and a drink.

In the studio, Chance likes to treat his team with baked goods, “specifically fresh croissants, coffee, and cake to share with everyone.”

Chance celebrated 420 in 2016 with an order from Shake Shack in Chicago. He ordered the Lemonade Featured Flavor, Fries and a ShackBurger. He also celebrated in 2018 with a custom order placed at 11am from Dunkin’:

Platinum artist, creative champion, Grade A dad, Chance is prolific on Postmates. Keep making an impact through your music and we’ll keep bringing the diapers. On that note, Chance told us that he feels “these things are integral to being a great father,” and we couldn’t agree more.

It seems like blessings keep falling in our laps, because you don’t even need to leave the house to get your hands on The Big Day. Stream Chance’s new album or have it hand-delivered to you by visiting Postmates.com or open the app to place your order.