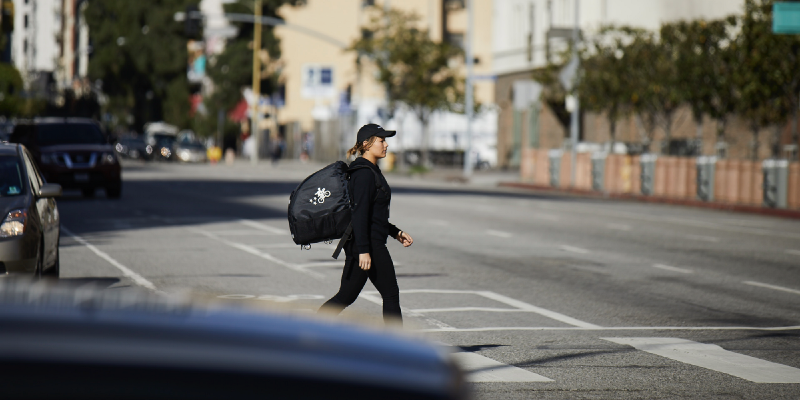 We’re a Company That Relies on Strong, Safe Communities, and There’s No Time to Waste When It…

We’re a Company That Relies on Strong, Safe Communities, and There’s No Time to Waste When It Comes to Common Sense Gun Reform

The Postmates platform only thrives if our merchants, customers, and fleet feel safe in the communities in which they operate and live. That’s why we’re proud to join Everytown for Gun Safety in calling on the United States Senate to pass common sense gun reform legislation.

El Paso and Odessa, Texas; Virginia Beach, Virginia; and Dayton, Ohio have been home to the four deadliest shootings in 2019. As part of each of these communities, we at Postmates have been both heartbroken and outraged by the lack of action to address this public health crisis, which most recently impacted our neighbors in Gilroy, California.

For a fleet member to pick up goods from a favorite neighborhood spot and bring them to a customer down the road — that simple act is contingent on the trust, safety, and wellbeing of everyone on our platform. That’s why Postmates employees have attended Moms Demand Action events, and why our company has donated to the Giffords Law Center to support their efforts around the issue of gun violence prevention. But that’s not enough.

Today we are joining other leaders from the business community in speaking out for common sense gun safety laws — because having the backs of our neighbors, storefronts, chefs, and fleet members is not about politics. It’s about demanding a country where everyone can work — and live — without fear.

Dear Members of the Senate:

Our hearts are with the victims, their families and loved ones and all those affected by the tragic shootings in El Paso and West Texas, and Dayton, Ohio. These families became members of a club that no one wants to join: the millions of Americans whose lives have been forever altered by gun violence.

Every day, 100 Americans are shot and killed and hundreds more are wounded. These are more than mass shootings; in recent weeks, gun violence has devastated Chicago, Canoga Park, Newport News, Gilroy and Brooklyn, among others. This is a public health crisis that demands urgent action.

As leaders of some of America’s most respected companies and those with significant business interests in the United States, we are writing to you because we have a responsibility and obligation to stand up for the safety of our employees, customers and all Americans in the communities we serve across the country. Doing nothing about America’s gun violence crisis is simply unacceptable and it is time to stand with the American public on gun safety.

Gun violence in America is not inevitable; it’s preventable. There are steps Congress can, and must, take to prevent and reduce gun violence. We need our lawmakers to support common

sense gun laws that could prevent tragedies like these.

That’s why we urge the Senate to stand with the American public and take action on gun safety by passing a bill to require background checks on all gun sales and a strong Red Flag law that would allow courts to issue life-saving extreme risk protection orders.

Background checks and Extreme Risk laws (also referred to as “Red Flag laws”) are proven to save lives. Since Congress established the background check system 25 years ago, background checks have blocked more than 3.5 million gun sales to prohibited purchasers, including to convicted felons, domestic abusers, and people who have been involuntarily committed.

However, in the decades since, the law requiring background checks on gun sales has not been updated to reflect how people buy guns today. The Senate must follow the House’s lead by passing bipartisan legislation that would update the background checks law, helping to keep guns out of the hands of people who shouldn’t have them, in an effort to save lives. Background checks on all gun sales are a common-sense solution with overwhelming public support and are a critical step toward stemming the gun violence epidemic in this country.

show signs that they are in crisis before they act. Interventions in states with Extreme Risk laws have already prevented potential tragedies. Expanding Extreme Risk laws to enable families and law enforcement nationwide to intervene when someone is at serious risk of hurting themselves or others is critical to preventing future tragedies.

These proposals are common-sense, bipartisan and widely supported by the American public. It is time for the Senate to take action.

Organizations with more than 500 employees:

Organizations with fewer than 500 employees: