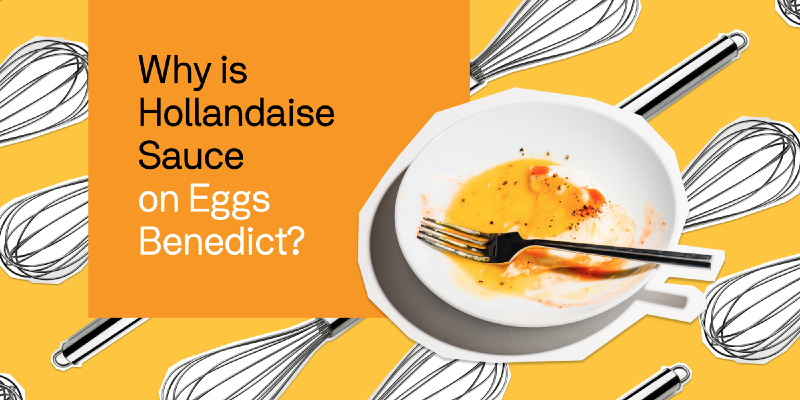 The silky sauce has been coating our poached eggs for centuries. But why?

Sauce. You’re familiar, yes? To be clear, we aren’t talking about that thing that comes vacuum-sealed in a plastic cup with your chicken nuggets. We’re talking about SAUCE. Mother sauces. Hand-whisked sauces. Sauces made by professional sauciers (aka chefs that just make sauce. Cool, right?).

Mother sauces are pretty important — they’re the foundation on which other sauces and meals are built. The five mother sauces can be credited back to 1903 and French chef Marie-Antoine Carême (technically Auguste Escoffier added the fifth one but gotta give credit where credit’s due). They are bechamel, velouté, espagnole, tomato, and hollandaise. Okay, now stop right there. That’s the sauce that we’ve got a few questions about.

The only thing you know about hollandaise might be that it’s got a permanent spot on your usual brunch order. But why is hollandaise sauce always on top of Eggs Benedict? Is it because the richness always goes well with a big gulp of champagne? Can’t be. And Google didn’t have the answers, so we decided to find out.

Back in the 1800s, sauce wasn’t for your pizza crusts — it was a treat for the wealthy. Mere peasants were sentenced to dry meats and bland vegetables. Years before the mother sauces were identified, Carême was a master chef for royals in 1816. And it’s widely assumed that if you were worthy, he’d class up your dish with a bit of hollandaise.

What’s in a sauce? Hollandaise is an emulsion of egg yolk, vinegar (these days, we use lemon juice), and plenty of butter. It was known as the perfect topper for meat, veggies, and…well, not Eggs Benedict. That dish wasn’t invented until 1894.

But then we run into a little bit of a problem. See, the story of who invented Eggs Benedict and how is kind of a mystery. Apparently there were lots of people in the 1890s that had both the last name Benedict and very specific egg orders.

No matter what story you believe, we know that someone named Lemuel Benedict entered the Waldorf Hotel in New York City one morning in 1894. As legend has it, Lemuel had a hangover and asked for “some buttered toast, crisp bacon, two poached eggs, and a hooker of hollandaise sauce.”

But why hollandaise? Why not ketchup (yes, it was already invented). Was butter just not going to cut it? A perfectly poached egg is already pretty saucy, so why, oh why, Mr. Benedict did you add that layer of hollandaise?

“Hollandaise was on tons of restaurant menus back in the day, but paired with non-egg dishes like veggies and fish.”

Well after some poking around, we noticed that hollandaise was on tons of restaurant menus back in the day, but paired with non-egg dishes like veggies and fish. We even dug up this Waldorf menu from 1897 that features something called ‘Saumon, Sauce Hollandaise’ (Is that how they used to spell ‘salmon’? No clue.).

Next time you’re deciding between that smoked salmon scramble or a classic eggs benny, think about your new friend Lemuel. He was kind of on to something.