Most major holidays are associated with some kind of food. Valentine’s Day, although known for its chocolates, doesn’t have a particular dish that everyone craves. Or does it?

While Italian and American food are noted to be the most popular cuisines to eat on Valentine’s Day, those who stay at home for the holiday tend to order dishes from a variety of cuisines. So the most cliche dish of the most romantic holiday is still to be determined.

To help discover the most idealistic spots for ordering in, as well as where a majority of romantics live, we took an inside look at our orders from Valentine’s Day 2019. Read on to see where your state stacks up, and maybe get some inspo for this year's festivities.

The East Coast Goes All Out 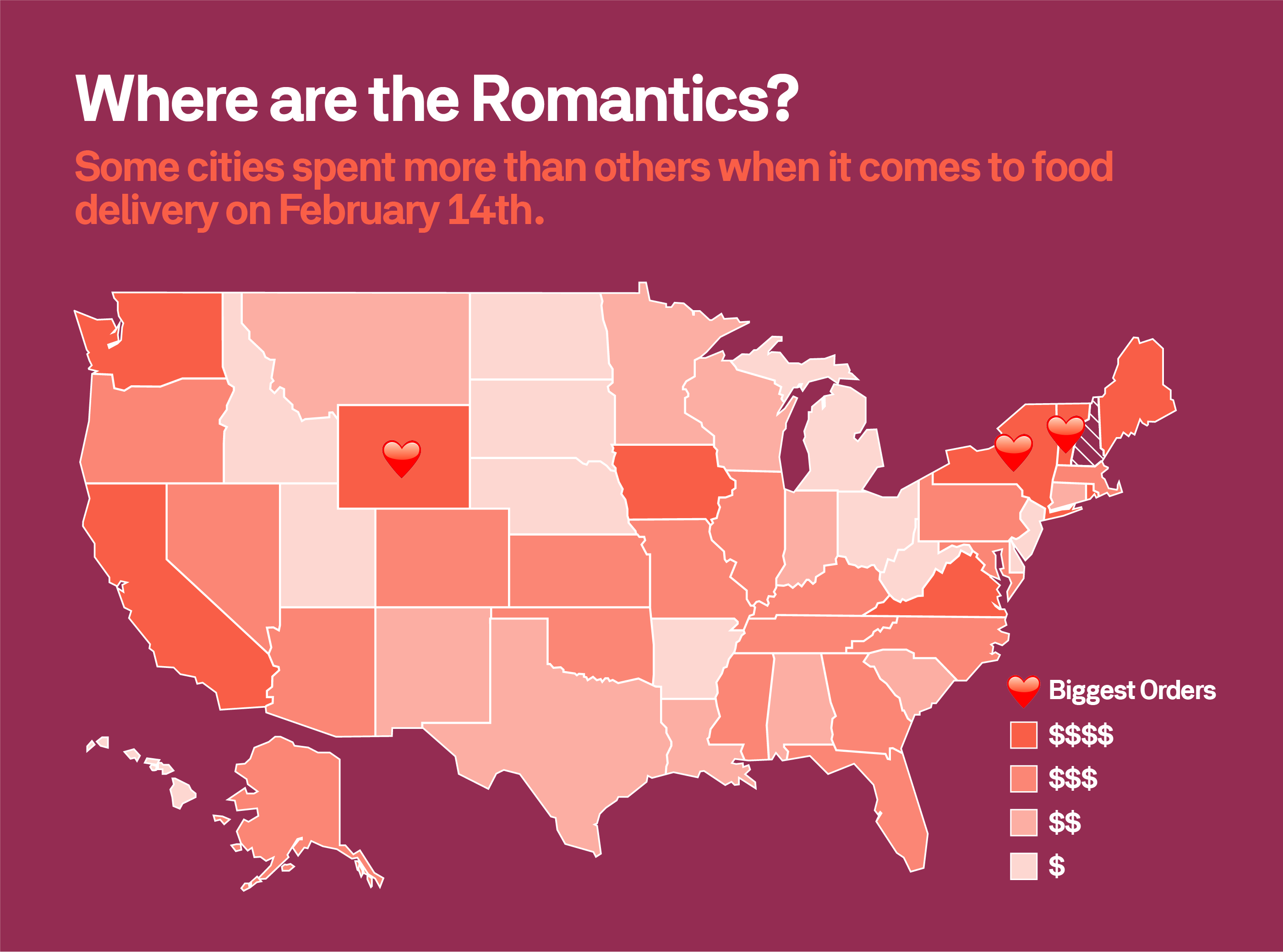 Virginia may be for lovers, but Vermont spends the most on delivery orders during Valentine’s Day. This is a trend we are seeing throughout the Eastern part of the country, as many of the biggest orders came from the Atlantic Coast. There are a few outliers, however, including Wyoming, Iowa and California, who all dropped significant cash on food delivery.

Contrary to popular belief, our biggest orders of the night weren’t for Italian food and desserts. Fast food chains and full service restaurants provided last minute assistance for date night, with orders for Mexican, American and Chinese food competing for the most popular Valentine’s Day grub. In the end, Chipotle came out on top as the most popular cuisine of choice. Shake Shack came in second and Panda Express followed close behind.

But no matter which cuisine our customers chose, they knew just what they wanted to order for their romantic night in. Around 74% of the orders we saw come through for Chipotle were for the chicken burrito bowl, with chips and a chicken burrito proving pretty popular as well. At Shake Shack, there was no shortage of orders for the classic Shack Burger and their well-loved cheese fries. 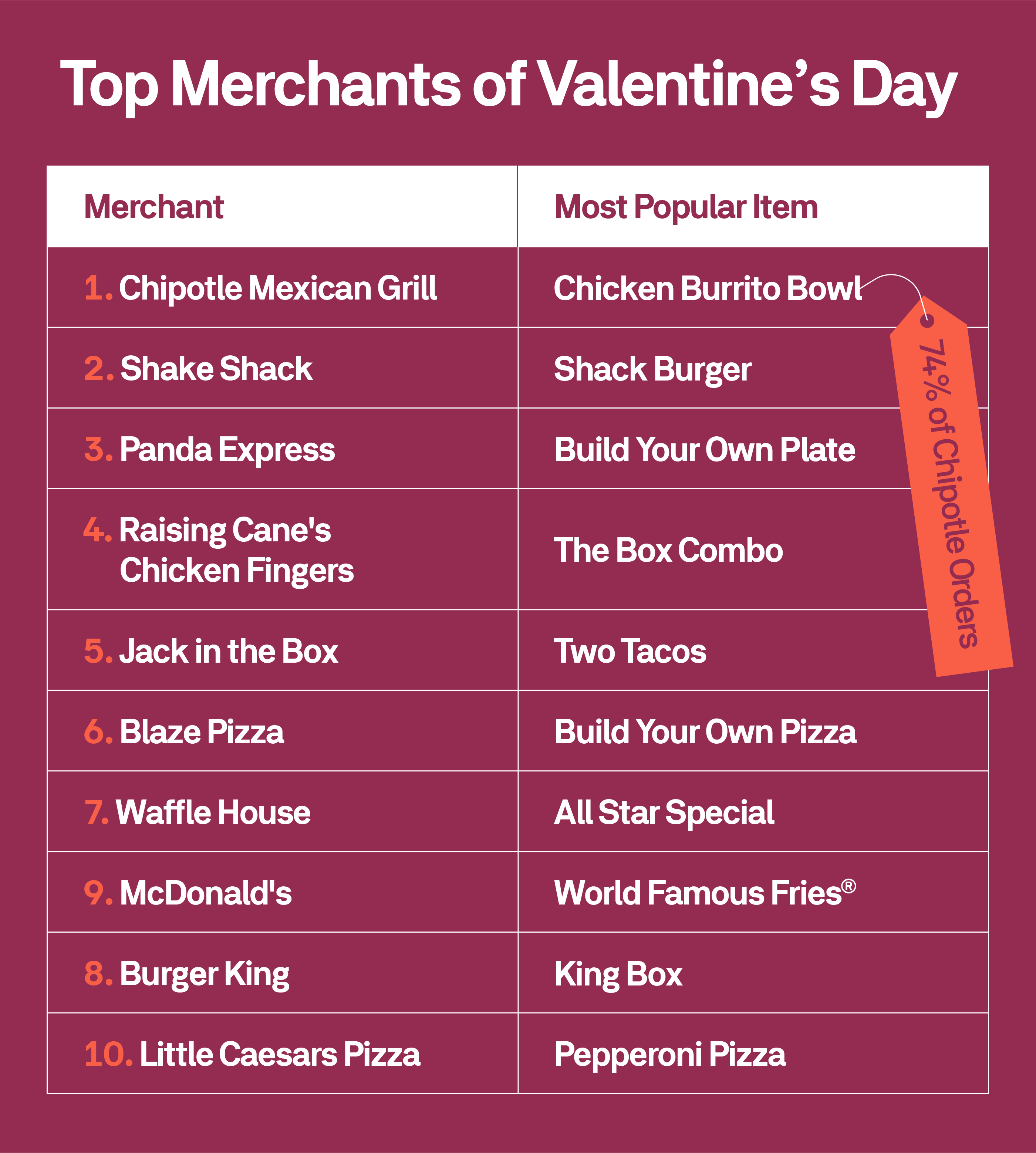 When it Comes to Booze, Classic is Best

Another staple of any holiday is alcohol. And while Valentine’s Day food deliveries tend to be outside the box, consumers aren’t interested in trying out new drinks. Instead, they’re ordering classics like Cabernet Sauvignon, IPA’s and Vodka to add a bit more magic to their night. 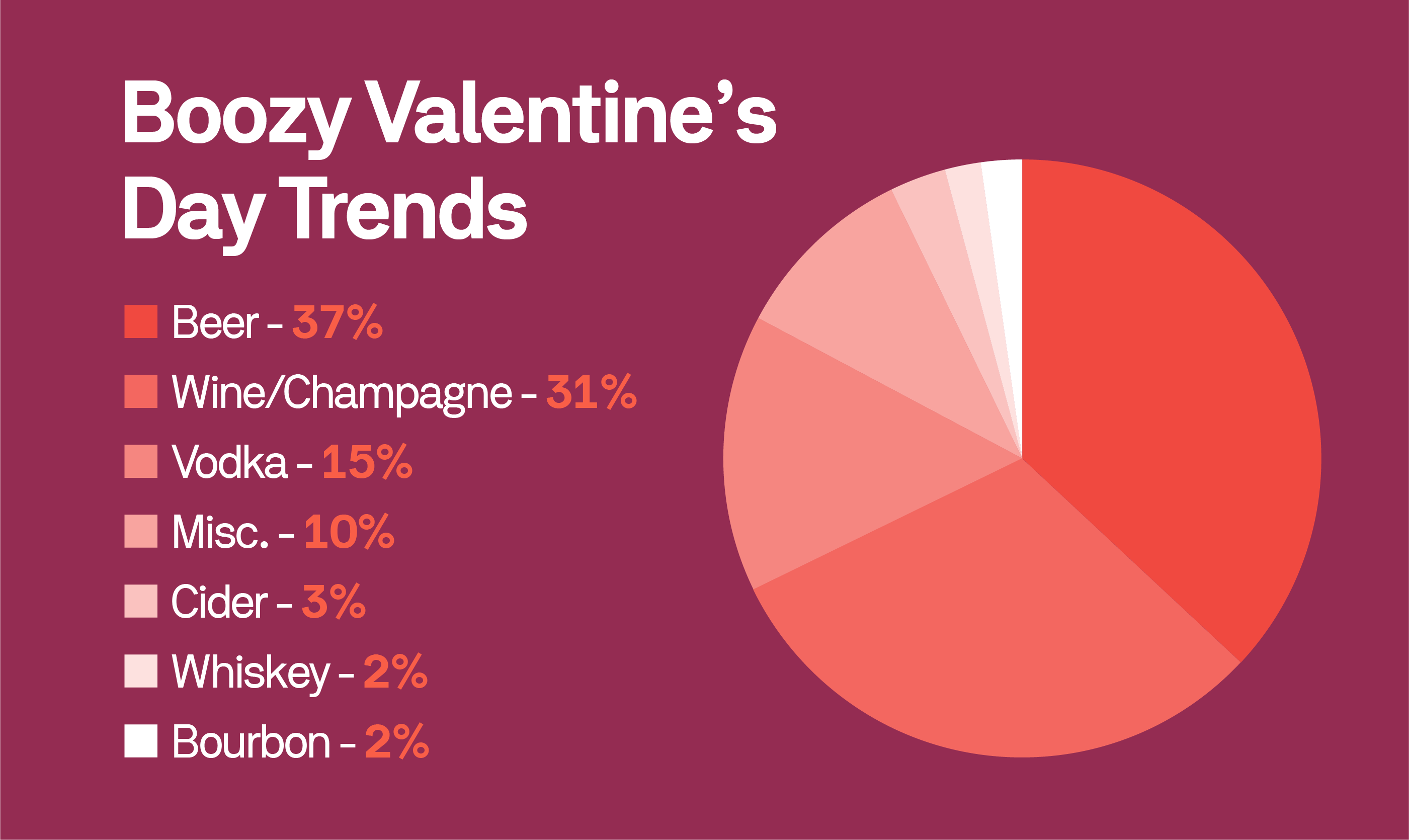 According to Restaurant Dive, Valentine’s Day is the second busiest night for restaurants out of the entire year. So before you make that reservation, consider the reality of a night on the town. On the one hand, you could whisk your date away for a night spent struggling to hear each other in a crowded restaurant, or you could have a romantic night in eating Chipotle by candlelight. But no matter what you choose, give us a call if you need a late night snack or nightcap and we’ll deliver it in no time at all. We’re nice like that.

Methodology: This study was conducted using Postmates internal sales data from all 50 states on February 14th, 2019.