Fast food giants like McDonald’s, Chick-fil-A and Wendy’s have dominated the market for years. And even with a host of new competitors opening shop every day, powerhouse brands and their influence over our current culture cannot be understated.

In the past, we’ve taken a look at celebrities’ fast food habits (Post Malone ordering $8,000 worth of Popeyes biscuits, for one) and we’ve worked with the Dodgers to get you food sooner. But now we’re digging deep into the industry to determine who makes the most per calorie and comparing how the 10 most popular chains stack up.

To calculate just how much each fast food chain makes per calorie sold, we added up the total calories from each restaurant’s current menu (excluding seasonal and catering items). Then, we divided their annual revenue in 2018 by the total calories on their menu to determine their approximate earnings per calorie. Here’s what we found: 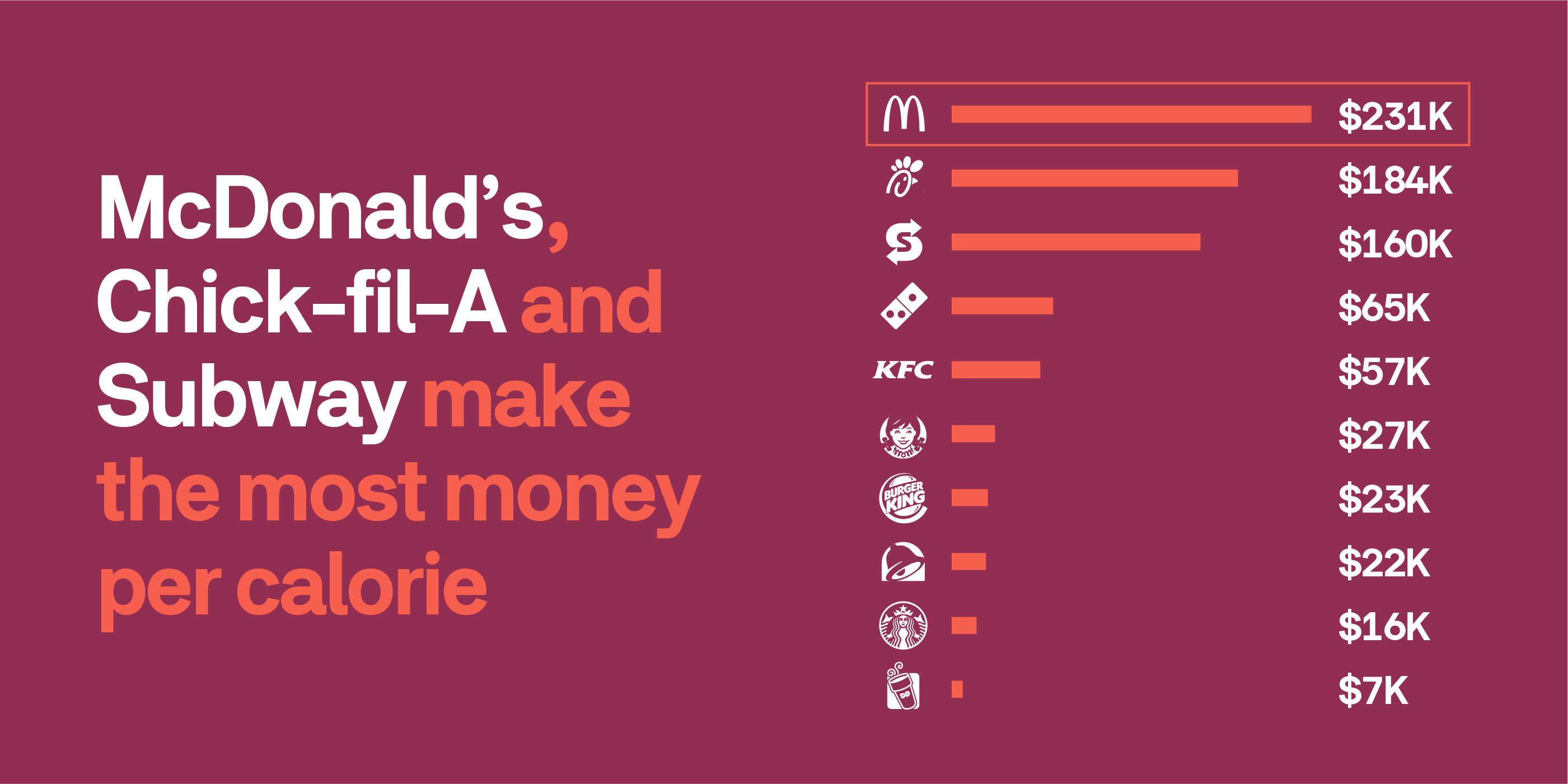 Fast food joints have perfected the art of a quick and delicious meal, all while saving their customers time. It’s this combination that has helped fast food stay relevant year after year, as their low price points and great service create life-long customers. To get insight into the market, we did the math to estimate how much some of the biggest brands will earn from each calorie sold. And it turns out, the dollar value of a calorie provides some really interesting insights into consumer trends and the state of the fast food industry as a whole.

McDonald’s: A Breakdown of this Fast Food Giant 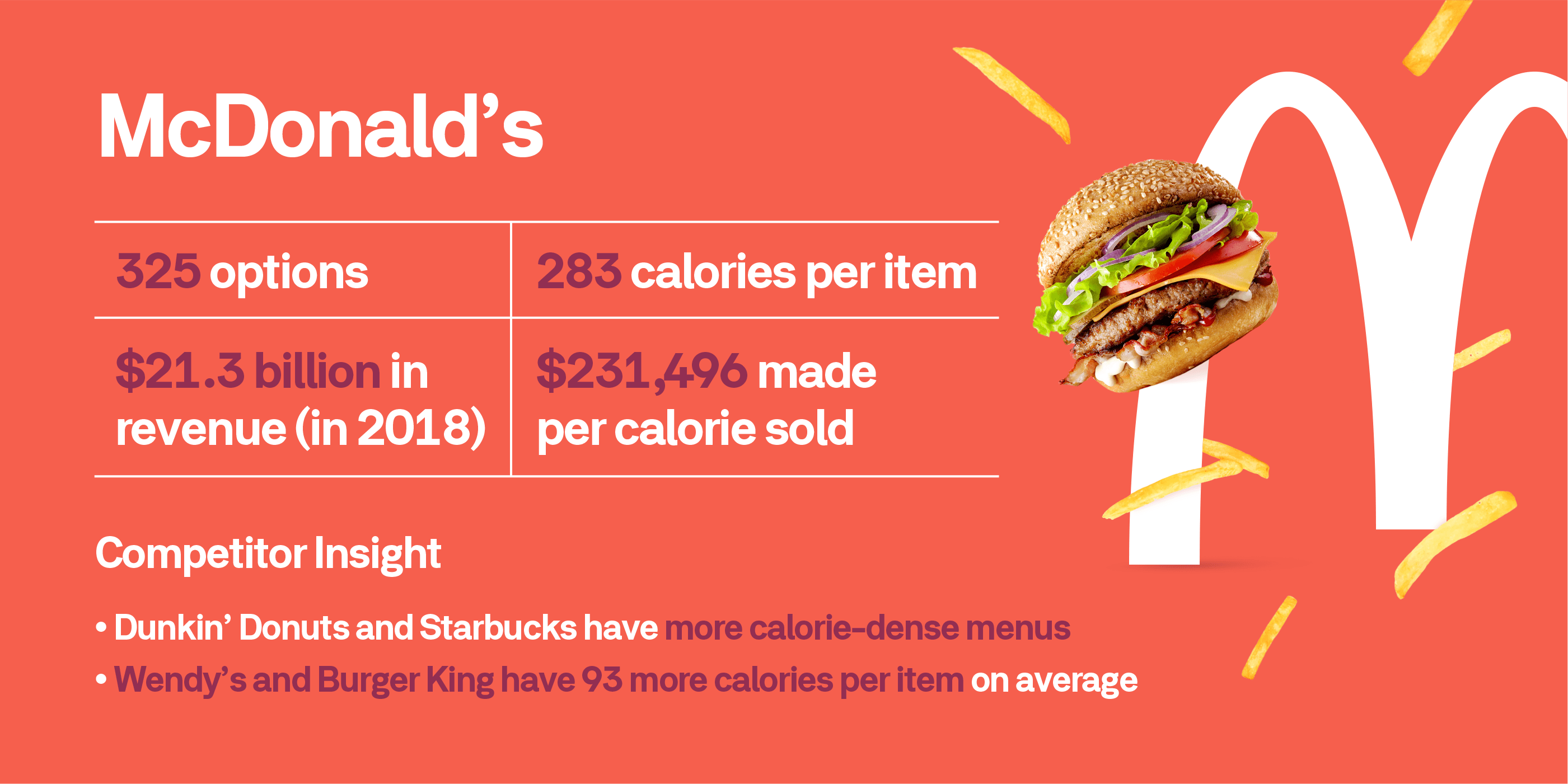 McDonald’s is in a league of its own when it comes to annual revenue and the average profit made off a calorie, but it does trail behind in a few categories. Their menu is the third most calorie-dense of the bunch, with Starbucks and Dunkin’ Donuts taking the lead. They also average about 283 calories per item, which is significantly less than competitors like Wendy’s (379) and Burger King (373). But hey, we know what we’re getting and who doesn’t love a Big Mac?

McDonald’s has introduced a host of new, healthy changes to its menu over the past few years in order to meet customer demand and increase customer return rates. These changes include switching from margarine to butter, adding apples to kids meals and implementing a variety of localized menu items. And they’ve seen a lot of success from these changes. For example, their switch to butter in 2015 was so successful that it doubled the sales of their McMuffins.

Chick-fil-A and the Rise of the Chicken Sandwich 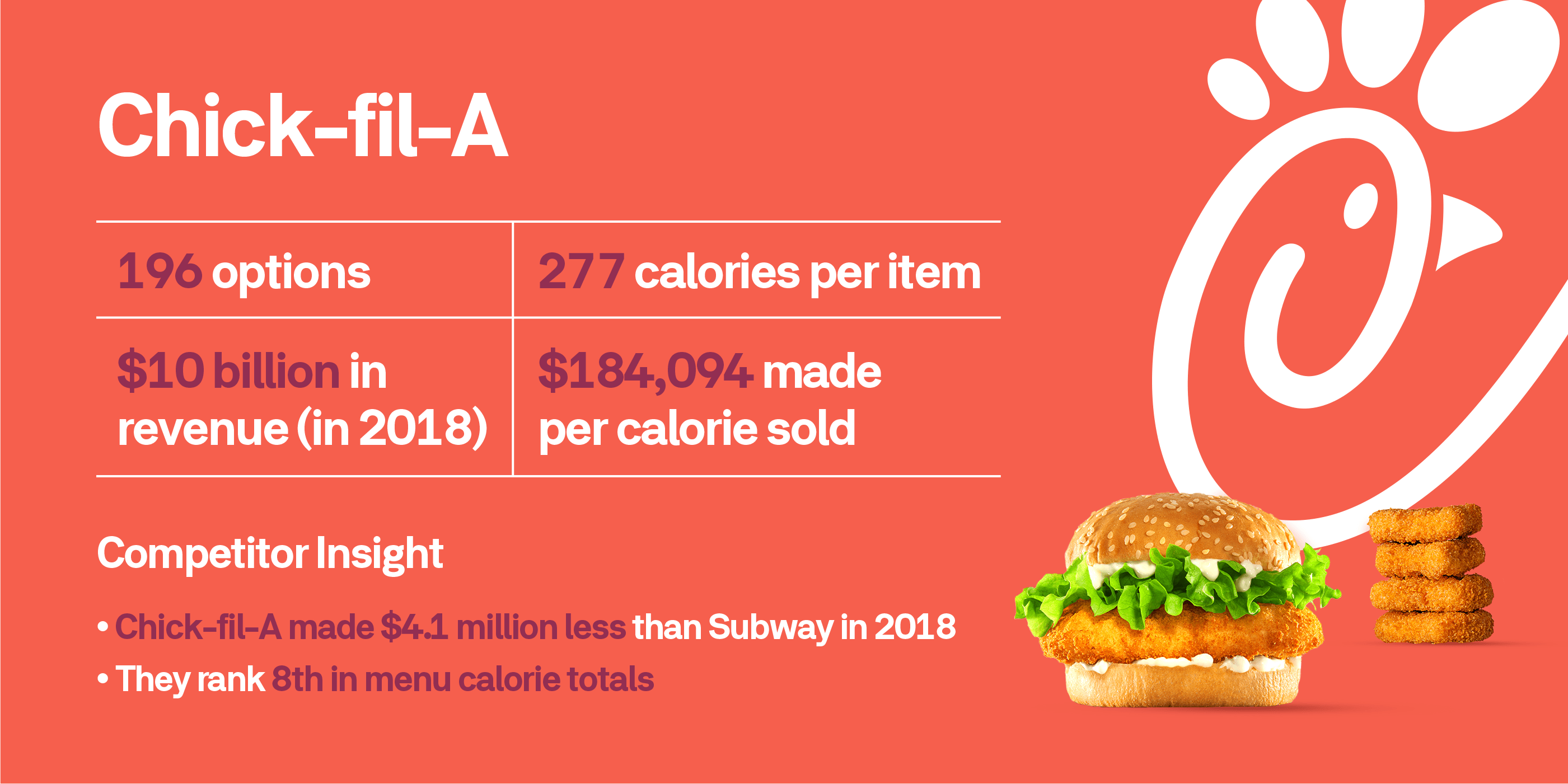 Chicken sandwiches might be all the rage lately, but the founder of this iconic combo isn’t sweating the competition. Chick-fil-A made an average of $10 billion worldwide in 2018, securing the number three spot among the 10 most profitable chains (and second in profit per calorie). They also offer a pretty low-calorie count in total (54,320) compared to other brands. And even though they are only open six days a week, this chicken joint took the second spot for most profit made per calorie. They even beat out their closest competitor, Subway, by over $23,000.

The Benefit of Eating Fresh 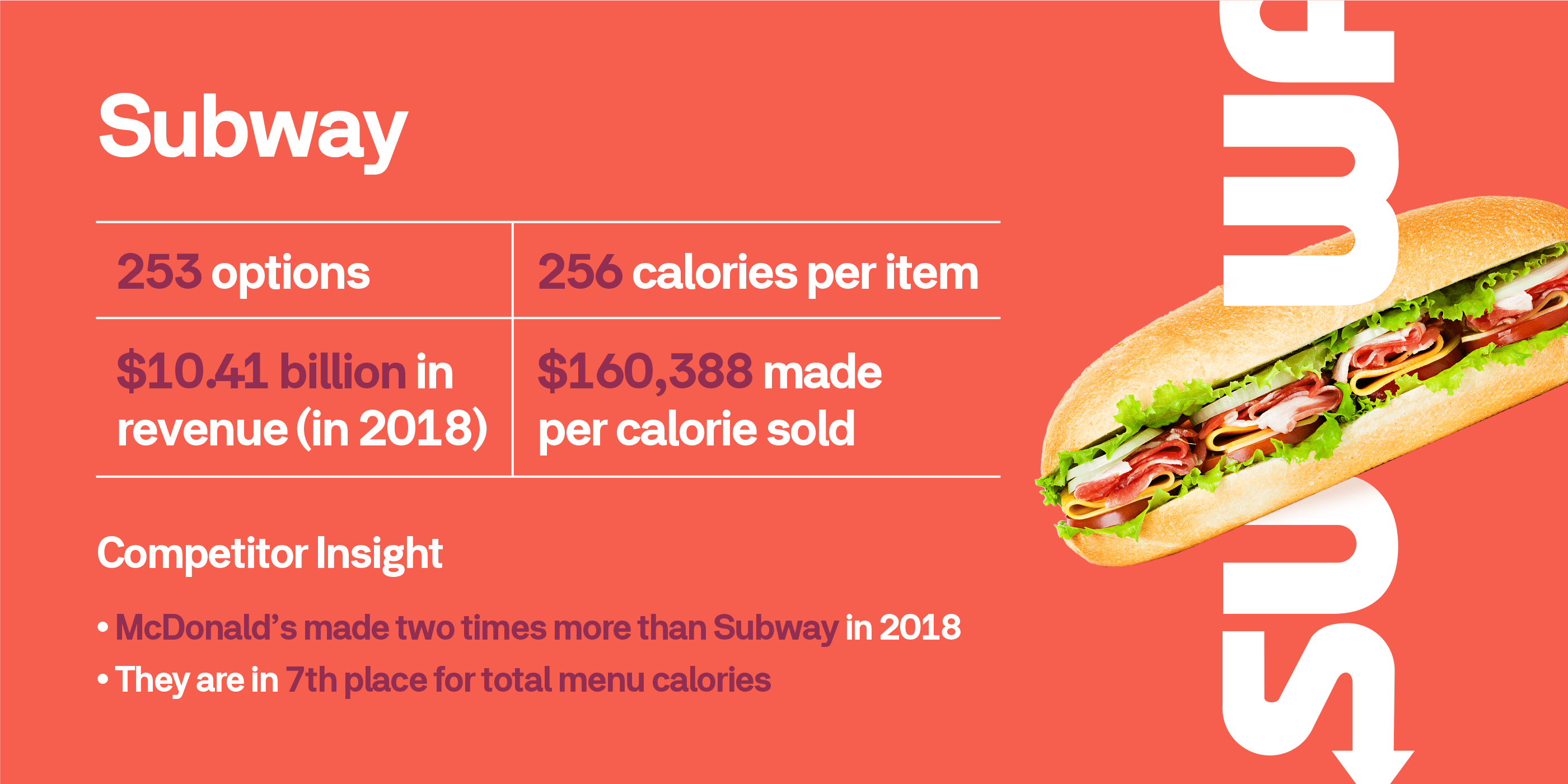 In third place for monetary calorie value, the brand focused on helping consumers Eat Fresh has an average calorie count of 56 per item, according to our estimations. But with 253 menu options, Subway proves to be a fan-favorite, making around $10.41 billion in 2018. While Subway is in 7th place for total number of calories in their menu, they still make over $160K per calorie, offering a pretty great profit for one of the few health-focused international chains. 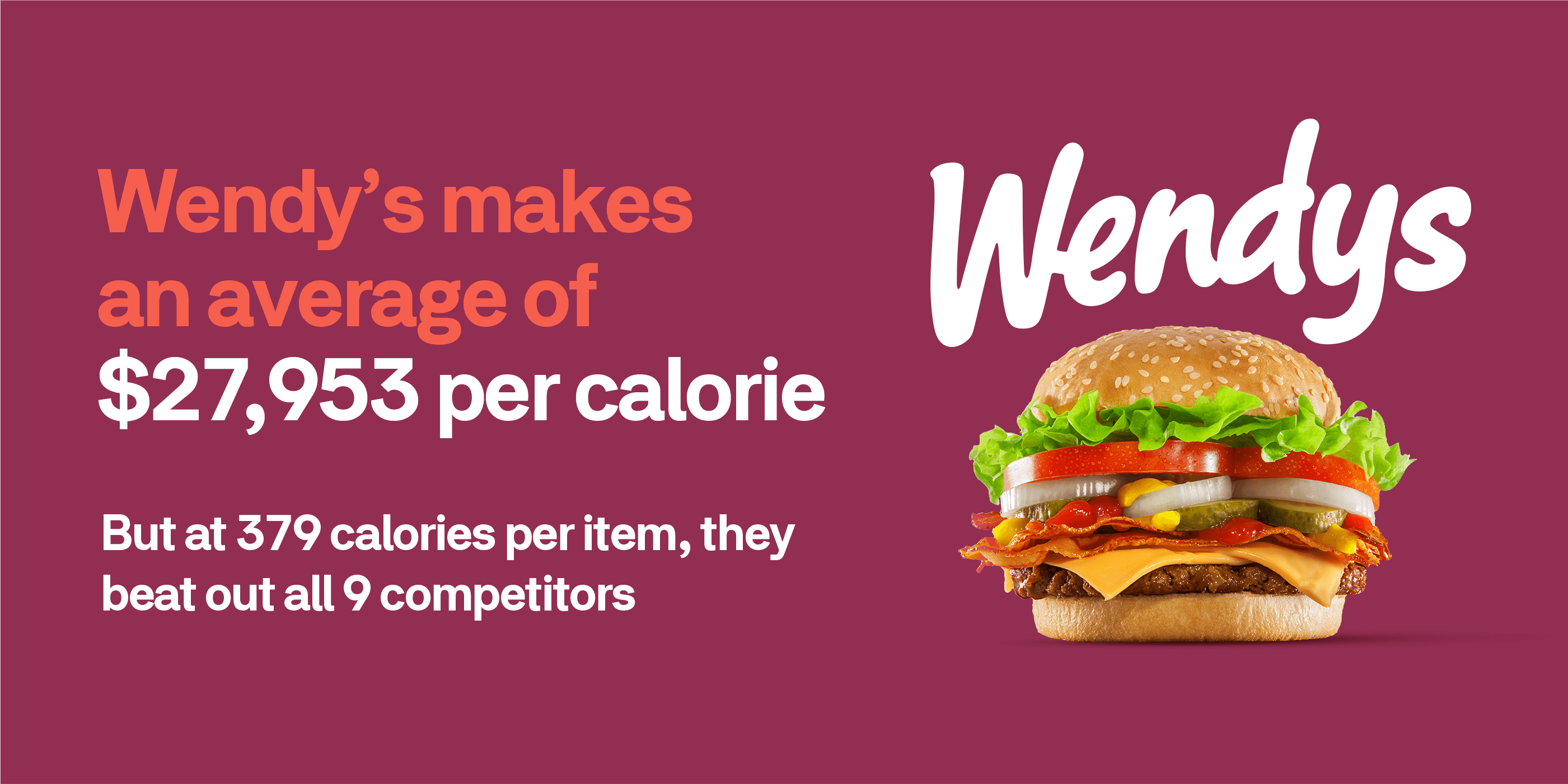 Another chain worth noting from our study is Wendy’s. Perhaps most known for their quick-witted responses on Twitter, the business itself makes around $27,953 per calorie sold. One of their most popular menu items, the Frosty, has been around since Wendy’s first opened in 1969 and was an instant hit. It’s estimated that Wendy’s sells about 300 million of them a year, thanks in part to the delicious frosty and fry combo that swept the nation.

Across the board, fast food chains have made significant changes to appeal to a wider variety of palettes. Some of these changes include adding calorie totals to their menus, highlighting alternative options and removing artificial ingredients. And this shift seems to be working, as they are banking major earnings for every delicious calorie sold. But no matter if you are a health nut or a drive-through regular, make it easier on yourself and get it delivered. We won’t judge your decision.

Methodology: Calories and menu items were pulled from each restaurant’s most recent data, excluding seasonal and catering items.