Would You Cry After a Major Cooking Fail? 8% of Americans Would

Everyone from kitchen newbies to culinary aficionados can agree that cooking fails are inevitable (pro tip: watch out for your fingers, or learn the hard way like this guy). Whether you are trying a new recipe or whipping up your favorite dish for the hundredth time, a slight distraction can turn a delicious meal into a disaster in seconds. Some fails are so bad—and hilarious—that people take to social media to share their kitchen mishaps with friends and family. But no matter how major your fail is, Postmates has your back with all your favorite snacks and meals ready to order for delivery at the touch of a button.

What do people typically do after a major cooking fail? First, they tend to tweet about it, see more on that later. We surveyed 1,000 Americans to get the inside scoop on just how emotional a cooking fail can be. 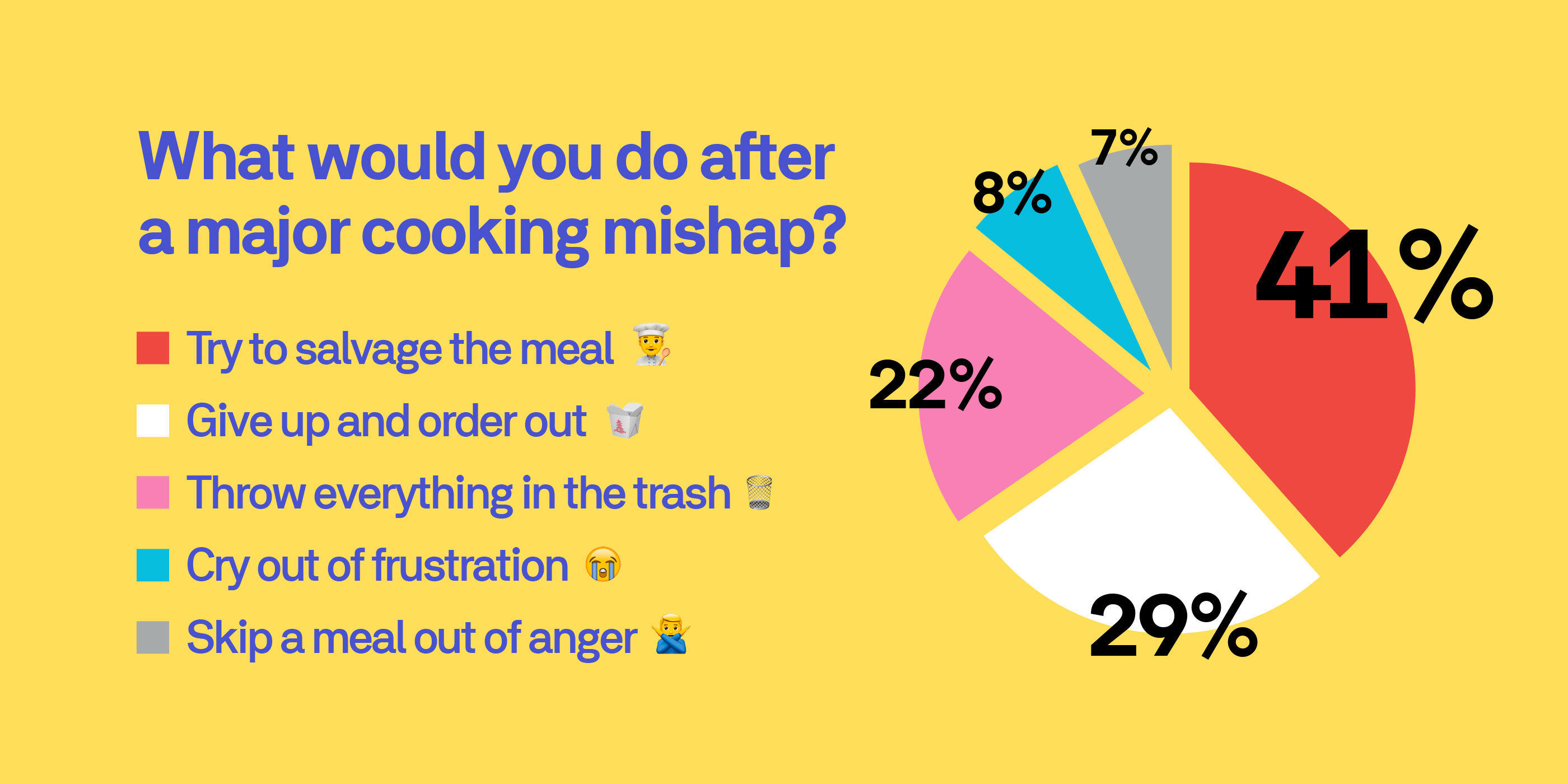 Just under half of Americans would try to salvage what’s left of their meal. The rest have a different approach, choosing to vent their frustrations instead of returning to the kitchen. 29% would give up entirely and order out (the best option, in our opinion). 22% would throw everything in the trash, 8% would have a good cry to get out their frustration and 7% would skip eating altogether out of sheer anger.

Different generations have quite unique approaches to cooking blunders. Younger home cooks (18–24-year-olds) are around twice as likely to cry out of frustration than older generations when faced with a burnt or overseasoned dish. But older generations aren’t immune to these cooking frustrations, as 25% would toss the entire meal in the trash rather than trying to salvage the dish. 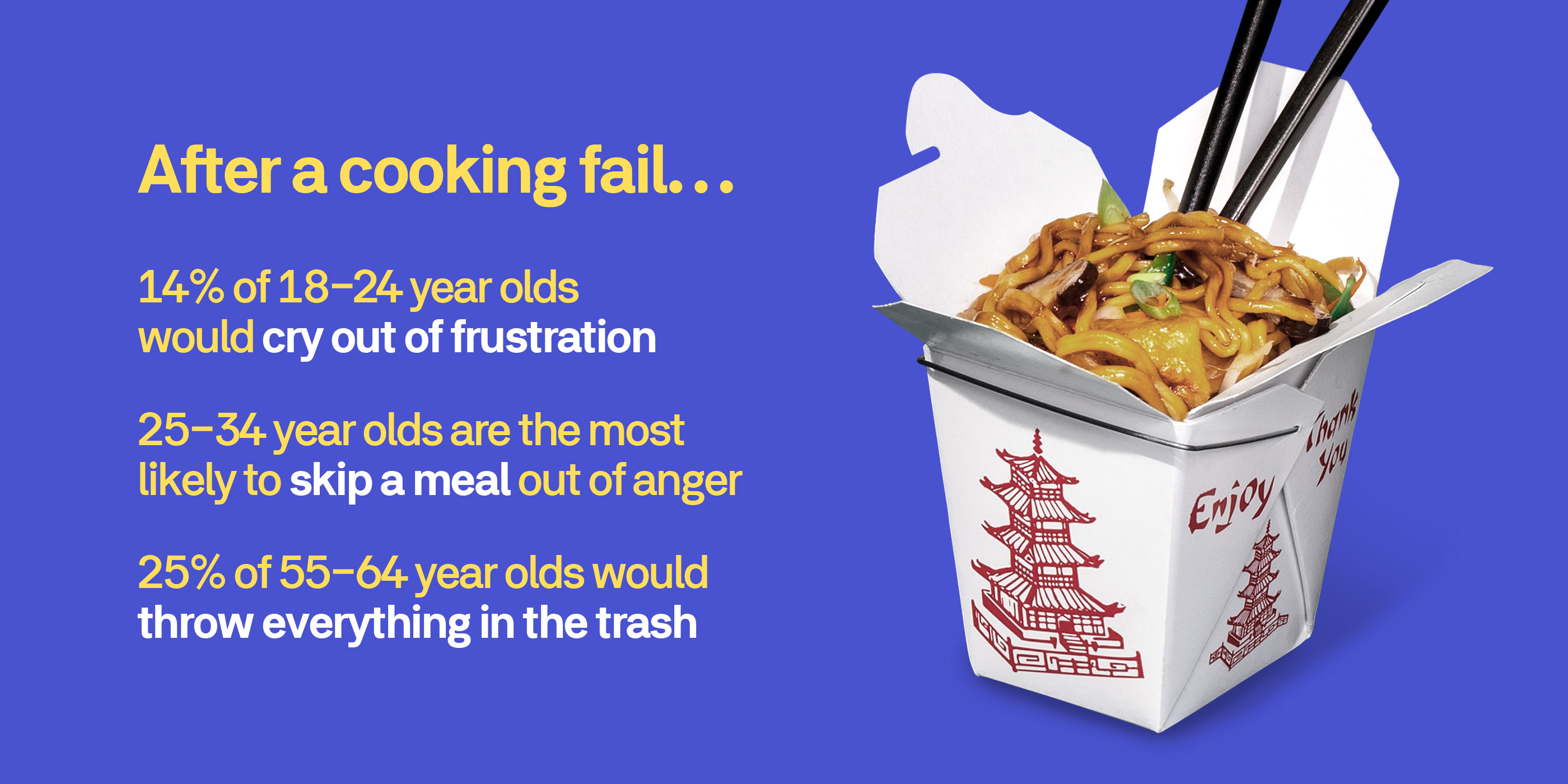 When looking at Twitter, we begin to get a better idea of just how common it is for people to share their misadventures. We analyzed all public tweets with the hashtag #CookingFail and #CookingFails from November 8th, 2017 to November 8th, 2019. The biggest faux pas? Burnt food. But that’s not all users admitted to over the past few years. 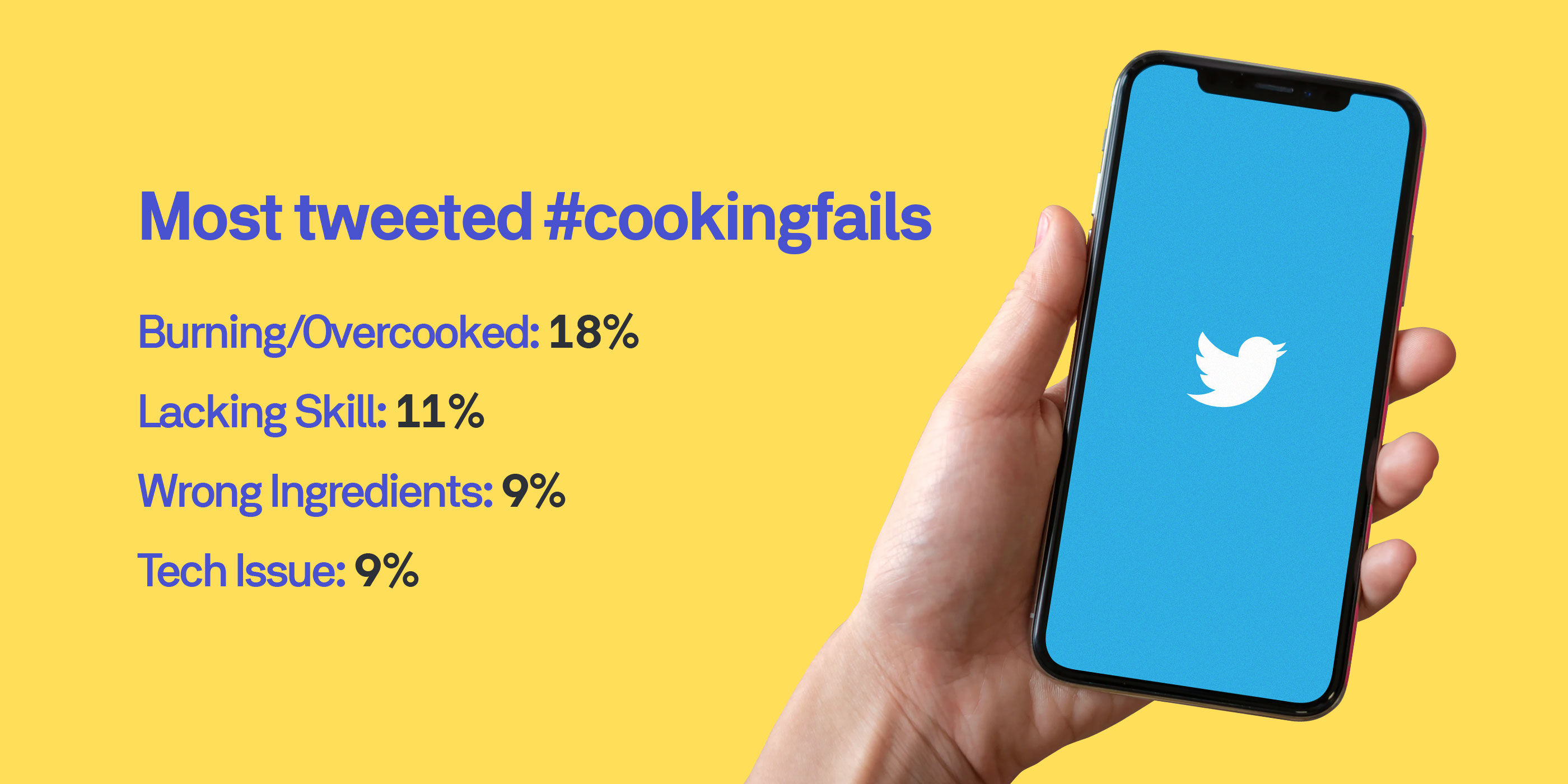 If you’ve ever slaved away in the kitchen only to take something out of the oven that resembles charcoal, you know the pain that comes from messing up a meal. But it’s not just burnt food that Americans struggle with during meal prep. Some other notable mistakes include over/under seasoning, injuring yourself, forgetting to buy something and even starting a fire (yikes). Out of all 1,085 public tweets analyzed over the past two years, some of the most tweeted about cooking fail categories include burnt food, wrong ingredients, forgetting something, starting a fire and overseasoning something.

From leaving eggshells in their omelets to forgetting to turn on the Instant Pot, people make a lot of mistakes in the kitchen. And it turns out, they really don’t have to learn. Technology has simplified the process so much that basic skills aren’t necessary anymore. The Washington Post reports that 60% of millennials don’t know how to carve a turkey (a staple of the holiday season), compared to 30% of boomers. And it’s not just carving that has been made easier by technology, gadgets such as automatic pot stirrers and food shredders are a huge hit with younger generations looking to take the effort out of the kitchen. So it’s no wonder why everything from salads to steak are susceptible to major food fails, as hands-on cooking gets put on the back burner. But that’s what delivery is for, right?

California is Home to the Most #CookingFails 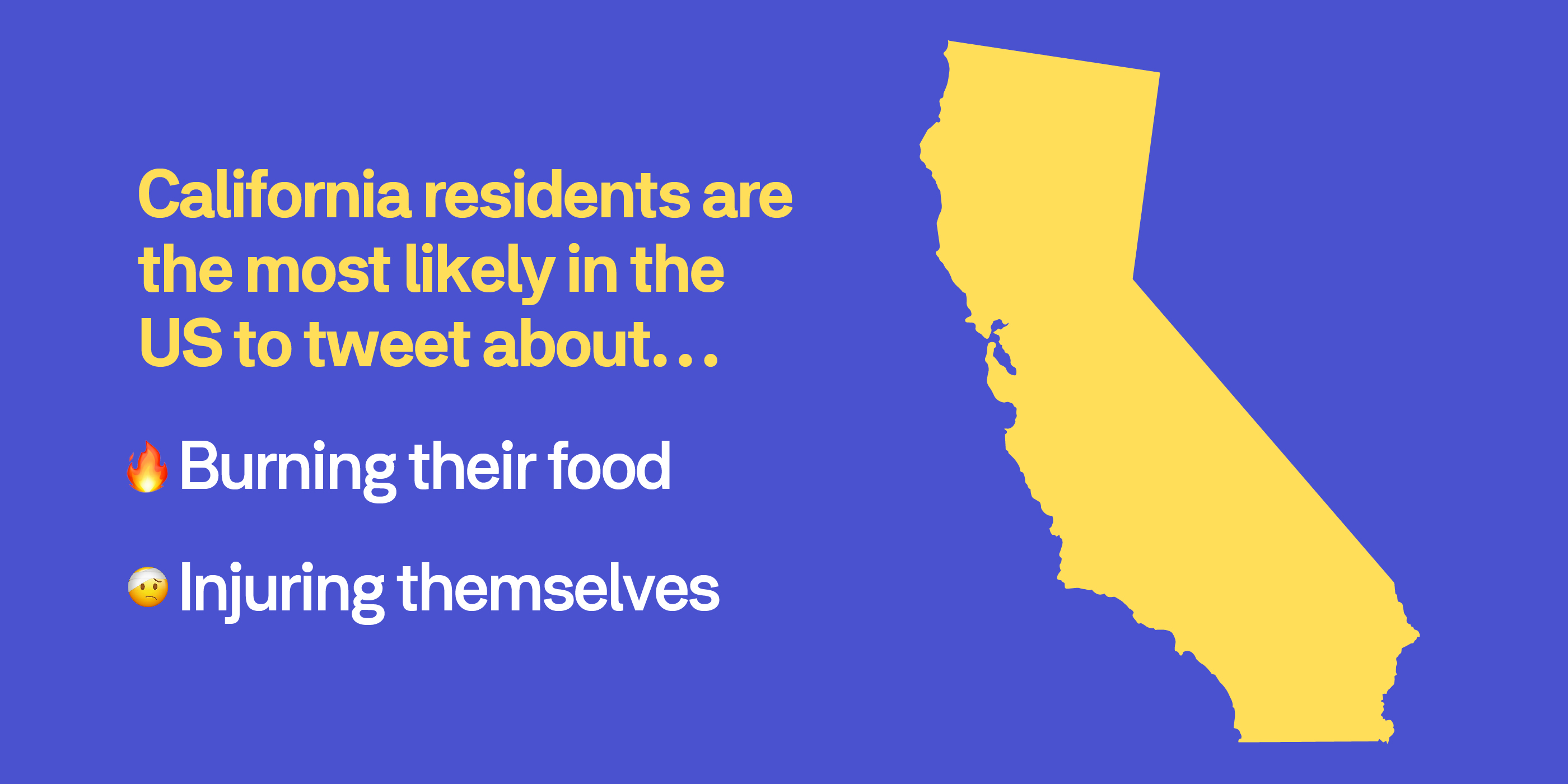 Our analysis found that Californians are some of the worst cooks in the nation. They ranked highest for tweets related to burning their food or injuring themselves. Whether it's their busy schedules, lack of skill, or just pure exhaustion, sticking to local delivery is the best bet for their safety (and taste buds).

No matter the type of misfortune, it’s clear that consumers aren’t afraid to poke fun at themselves as they work to master basic skills. The more high-profile holidays like Thanksgiving or Christmas dinner, however, are often left to the pros. Our holiday delivery survey found that desserts and appetizers are the most likely items to be ordered for delivery during the holiday season. But you don’t have to wait for a special occasion to order up-scale takeout. Take a break from cooking lessons and order your favorite cuisine to-go. Then get back to practicing the perfect julienne once your belly is full.