It’s estimated that football fans spend about $14 billion celebrating the Super Bowl every year. And no, that’s not a typo. From superfans traveling across the country to party guests just there for the food, the Super Bowl is a cultural phenomenon. People are more than happy to shell out cash left and right to properly celebrate (and by that we mean eating food and drinking booze).

While some die-hard fans will be purchasing apparel, decorations, or even a new TV, the National Retail Federation estimates that about 79% of consumers will buy food and drinks for their parties. And this got us thinking...with the amount of viewing parties hosted throughout the nation, just how many of them are relying on delivery to help keep the party going?

To determine just where the ultimate Super Bowl foodies reside, we turned to our own data. Looking at orders from last year's game, there were a few cities that stood out among the rest. Is your town on the list? 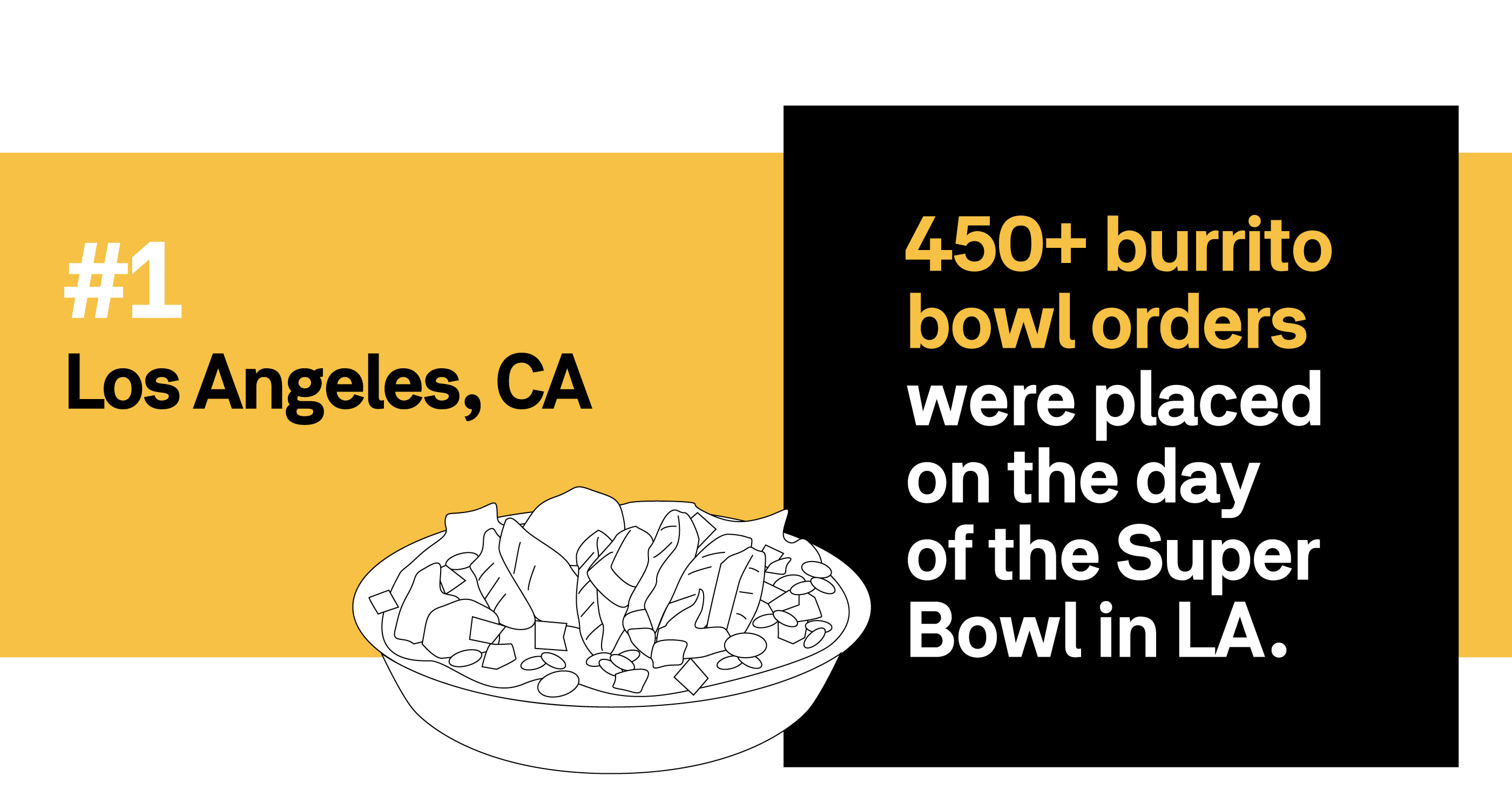 Playing in the biggest game of the year in 2019, it’s no surprise that Rams fans went all out to celebrate. Burrito bowls, tacos and french fries were the main snacks of choice. But food wasn’t the only thing that was ordered in Los Angeles. To keep the party going, alcohol orders of Stella Artois, Tanqueray gin and Corona Extra spiked throughout the day. And while they weren’t the biggest drinkers of the bunch (keep scrolling for more on that), the massive number of orders placed solidifies Angelinos as the top city. 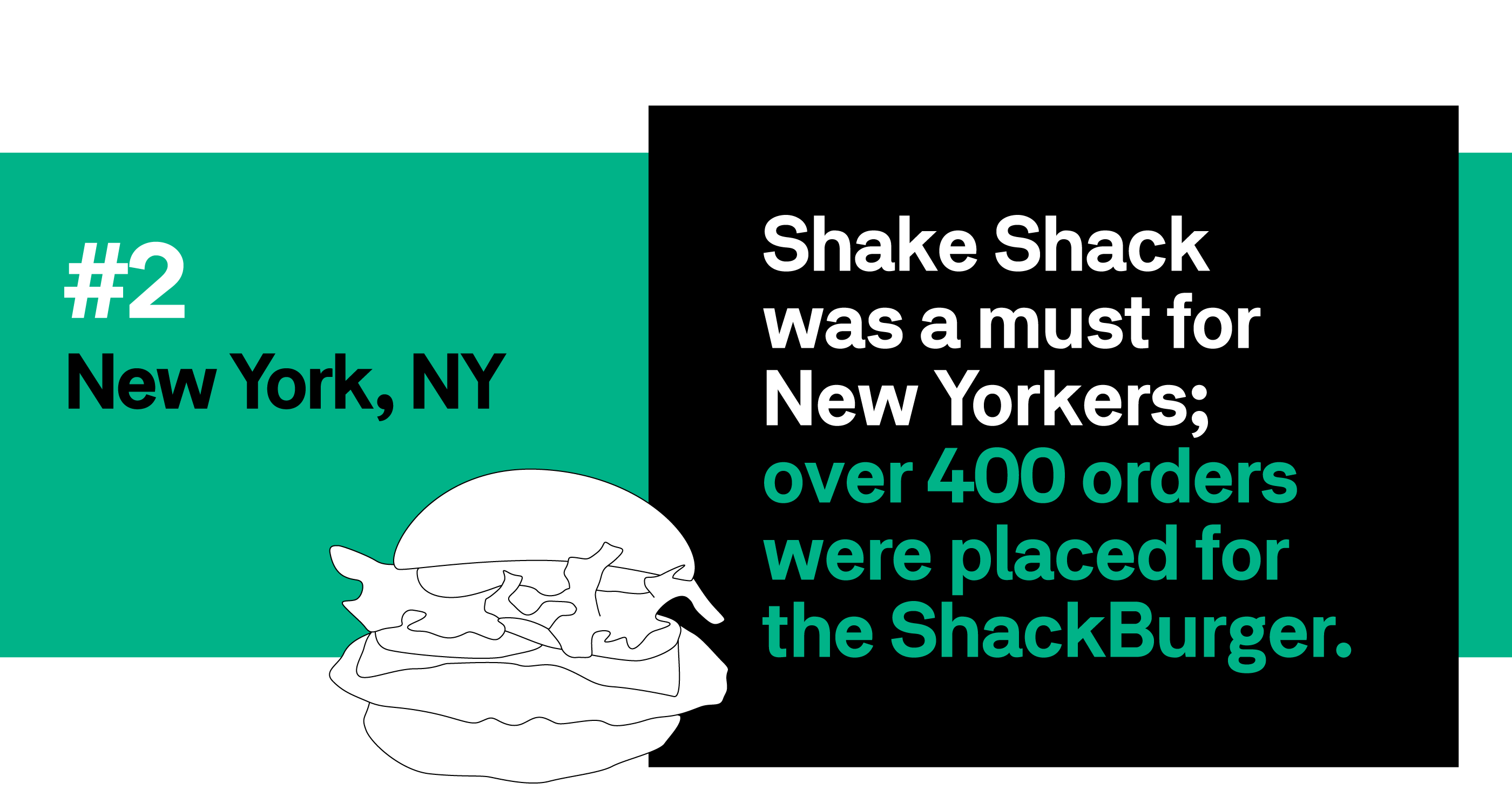 New York football fans, rejoice. Although NYC spent under half of LA’s numbers, they still came in at second place on our list. During Super Bowl sunday, New Yorkers requested a variety of unique items. Some of the most unexpected? Ice cream and chinese food. More traditional options were the most popular, like fries, burrito bowls and burgers. And while New Yorkers might have ordered less items than those on the west coast, the cost of their average order was actually a bit higher than anyone else on this list. 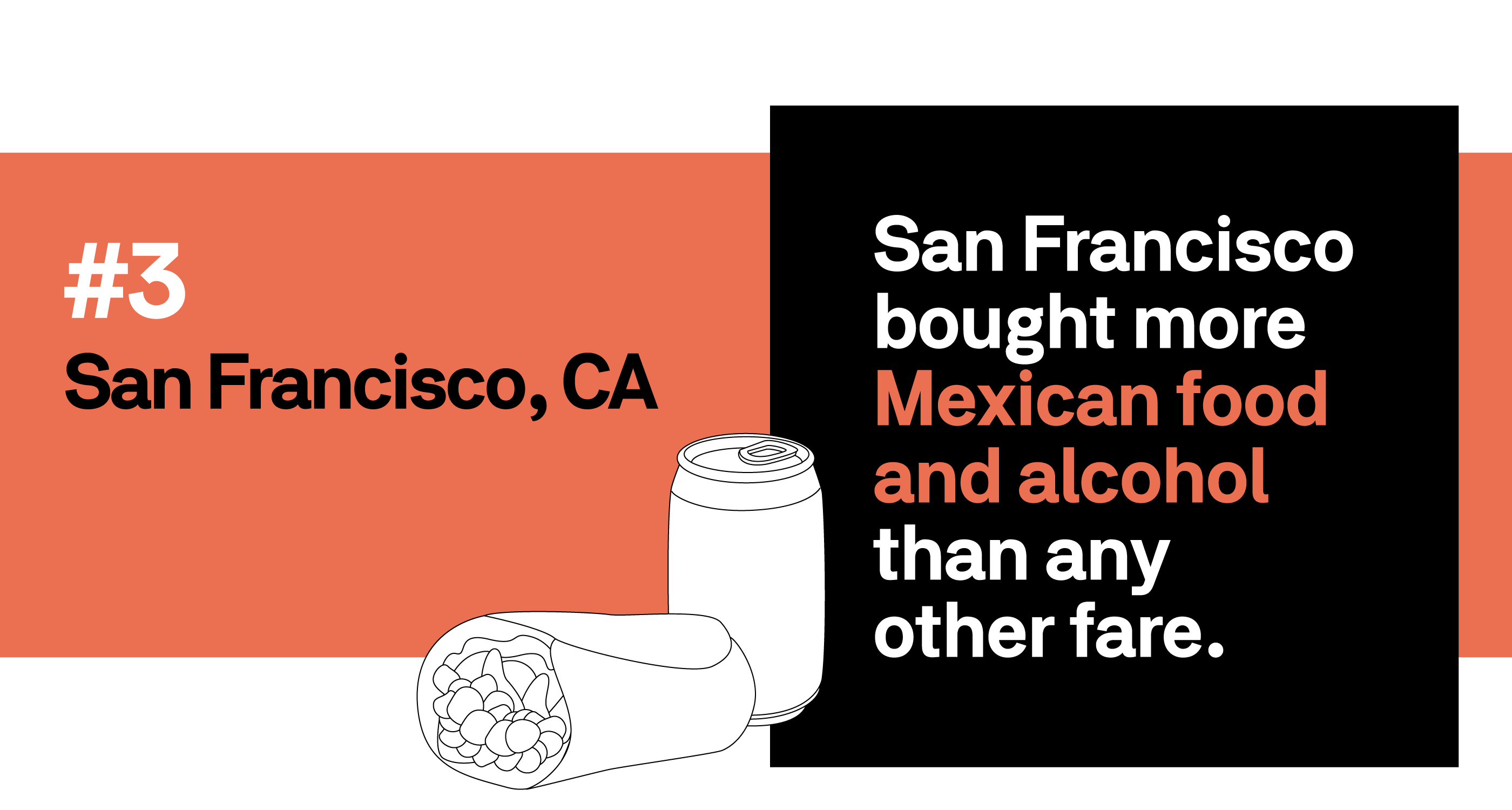 Another city that doesn’t play when it comes to watching the game is San Francisco. During their mexician food spending spree, they ordered tacos, burrito bowls and chips and guacamole. But instead of taking a mid-afternoon siesta, they amped up their parties even more by ordering their favorite beers and liquors throughout the day. But it’s no surprise that they are ready to party, as the 49-ers have five Super Bowl wins under their belt. 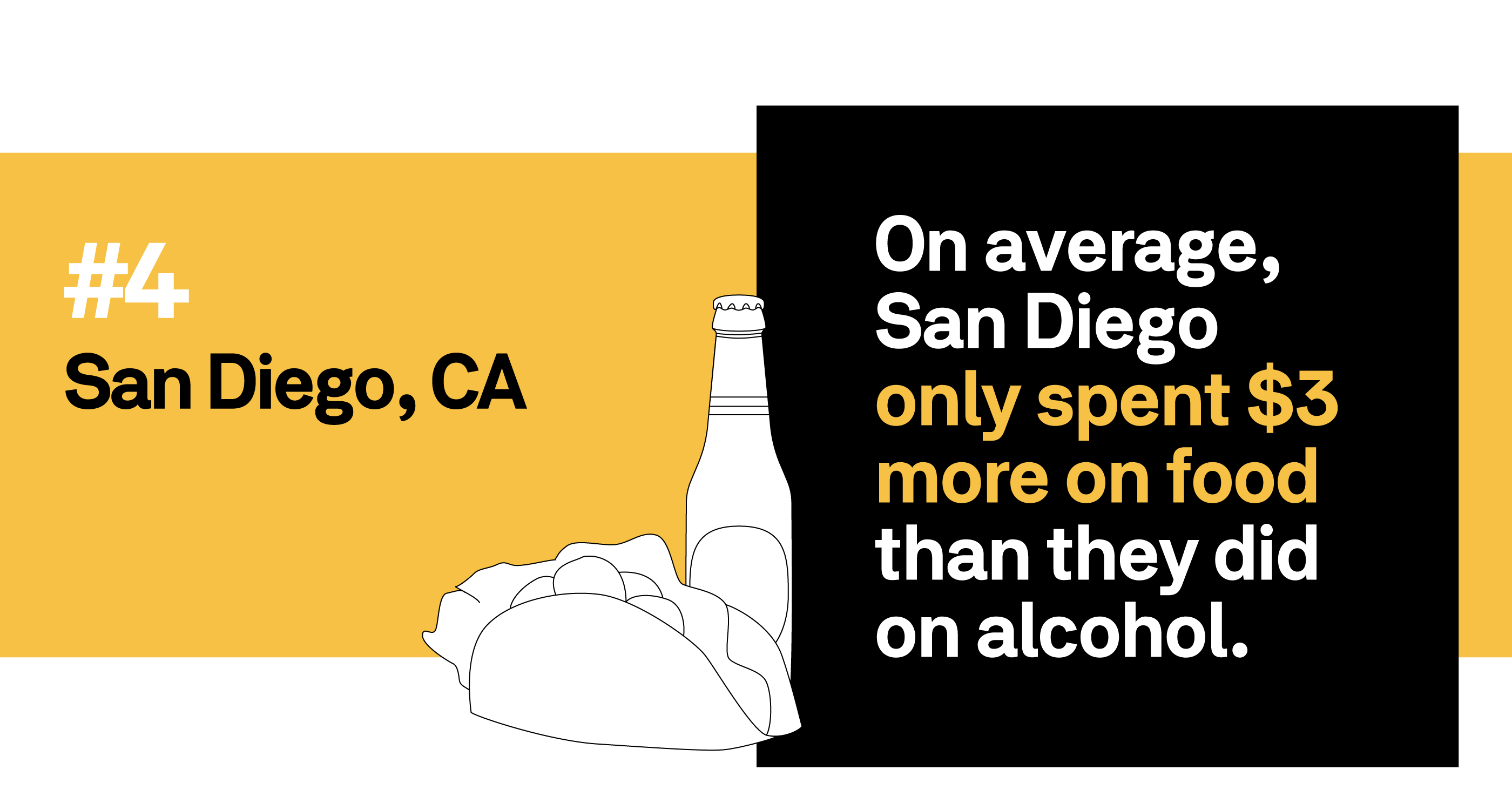 The third Cali hub on our list, San Diego, takes the fourth spot for most money spent. Although they last hosted the Super Bowl all the way back in 2003, their spirit hasn’t taken a hit. With so many teams in nearby cities to root for—the Rams in LA, for one—San Diego is full of football gusto for the entire season. This energy is highlighted during the Super Bowl, as our San Diego customers ordered just as much food as they did booze for their parties. Like many of their sister cities, burrito bowls and tacos topped the list of favorite foods to have delivered, and we quickly obliged. 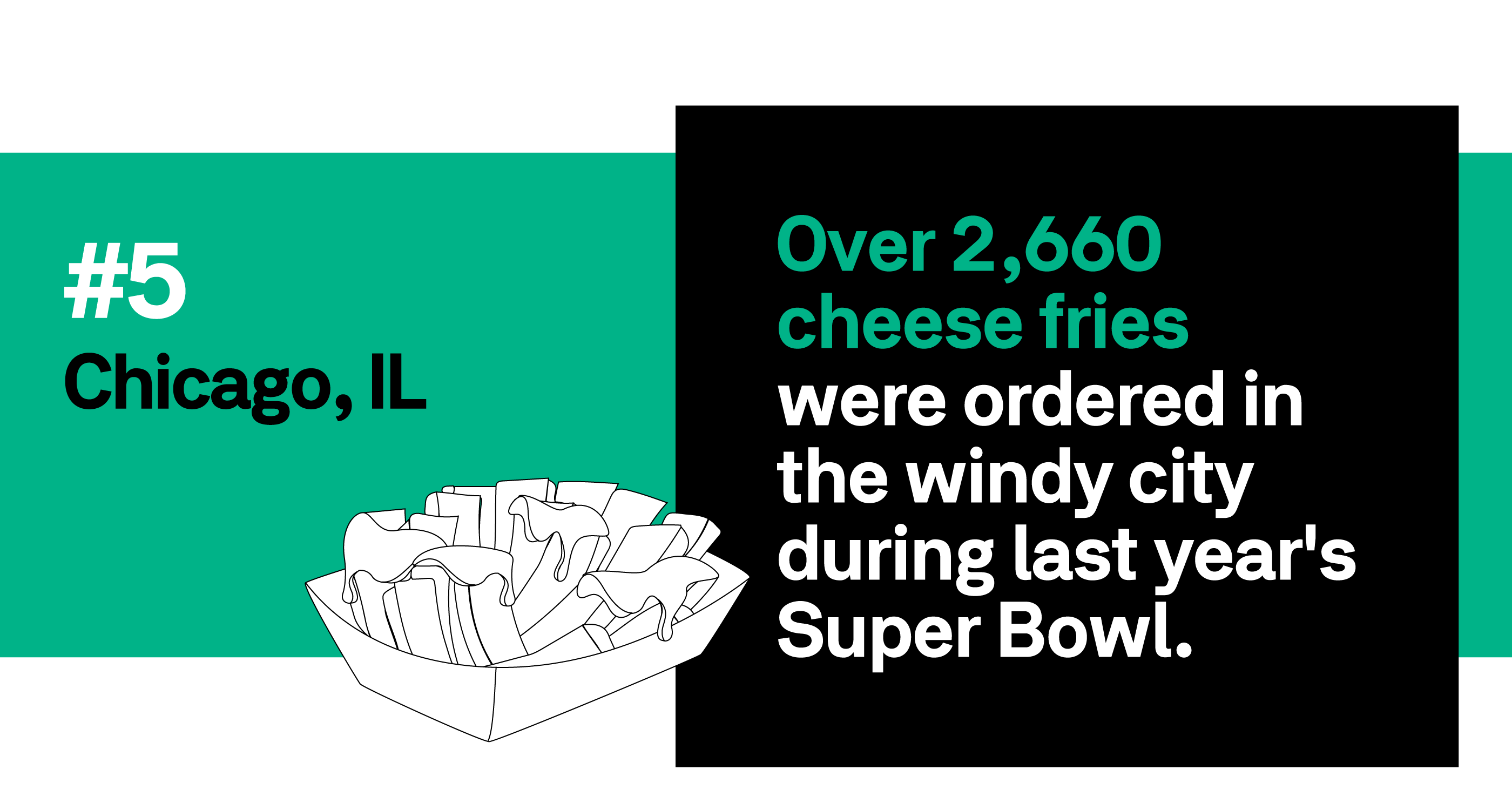 Home of Da Bears, Chicago residents come in at number five for the cities that spent the most last year. Founded in 1920, the Chicago Bears are actually the second oldest team in the NFL (coming in second place to the Arizona Cardinals). Because of this, Chicago residents hold a deep-rooted pride for their team and the game itself, spending their dough on things like cheesy fries, Titos and burrito bowls to celebrate the 53rd Super Bowl. 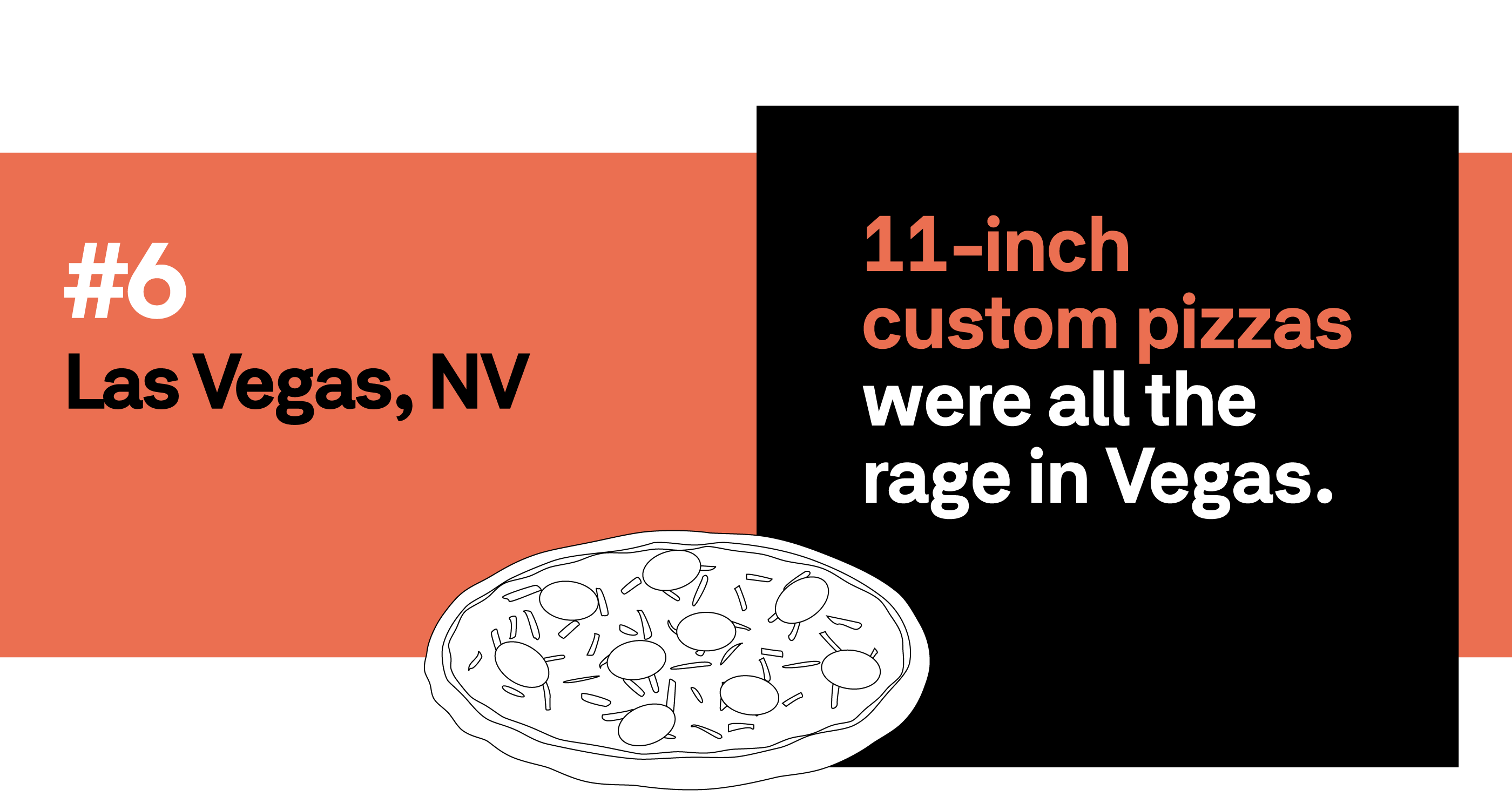 Allegiant Stadium, a $2 billion arena that was recently erected in this Nevada paradise, is set to serve as the new home of the Oakland Raiders at the start of the 2020 season. So even though Las Vegas customers took advantage of delivery services last year during the Super Bowl, we can expect even more to try it out in the coming years as they finally secure an NFL team of their own. While many of their food orders matched other cities on this list, they ordered a surprising number of pizzas, even customizing them to make sure their parties go off without a hitch. 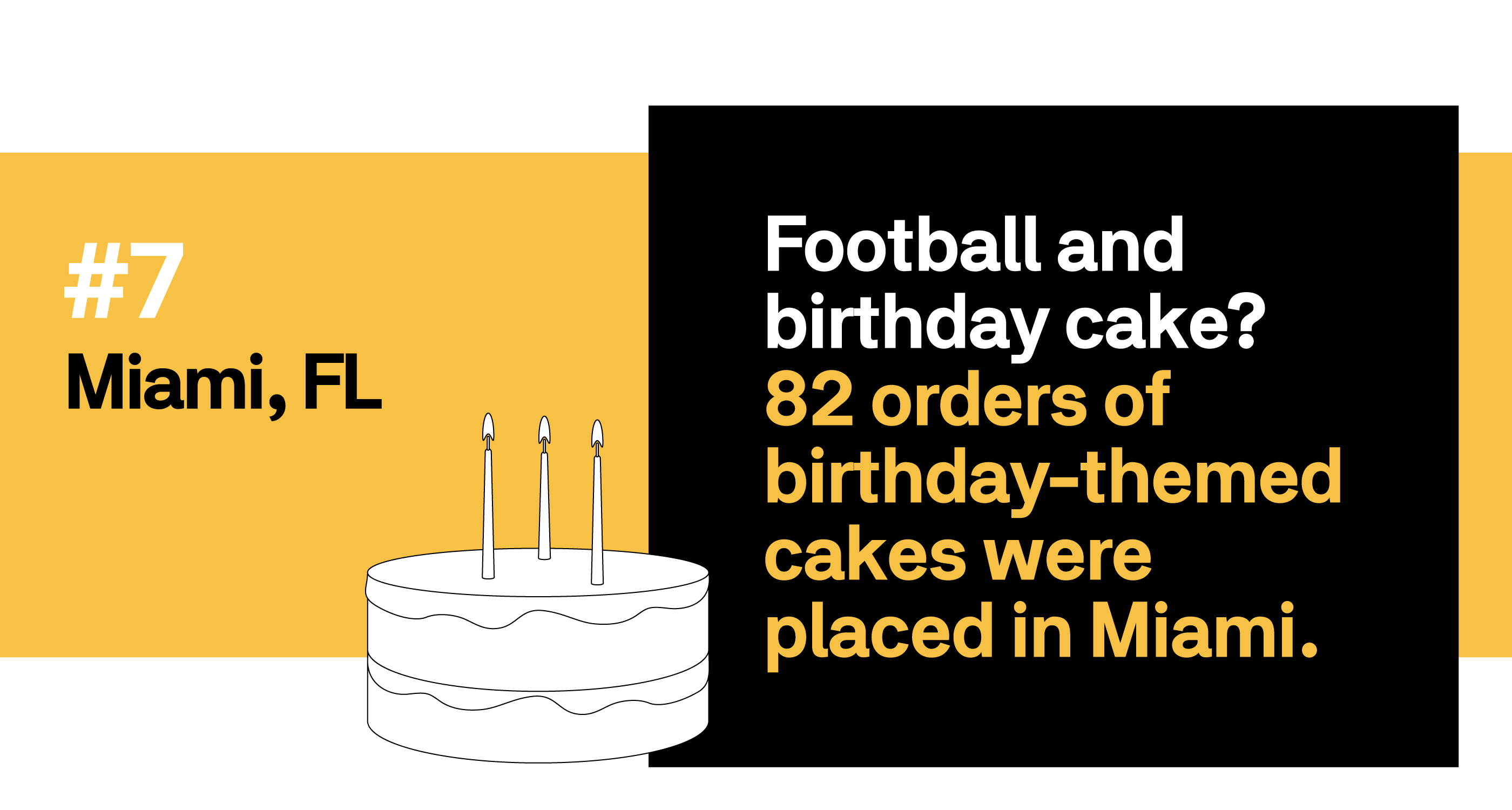 Hosts of the 2020 Super Bowl and known partiers, Miami loves a good celebration. But it turns the game isn’t the only thing they were celebrating on February 3rd, 2019, as we clocked over 80 birthday cake orders that Sunday. With cake in hand, Dolphin fans placed a lot of orders for burrito bowls from Chipotle as well. We are guessing they’ll have to order double (if not more) this year as football fans and birthday party attendees from around the world make their way to Miami to be a part of the action. 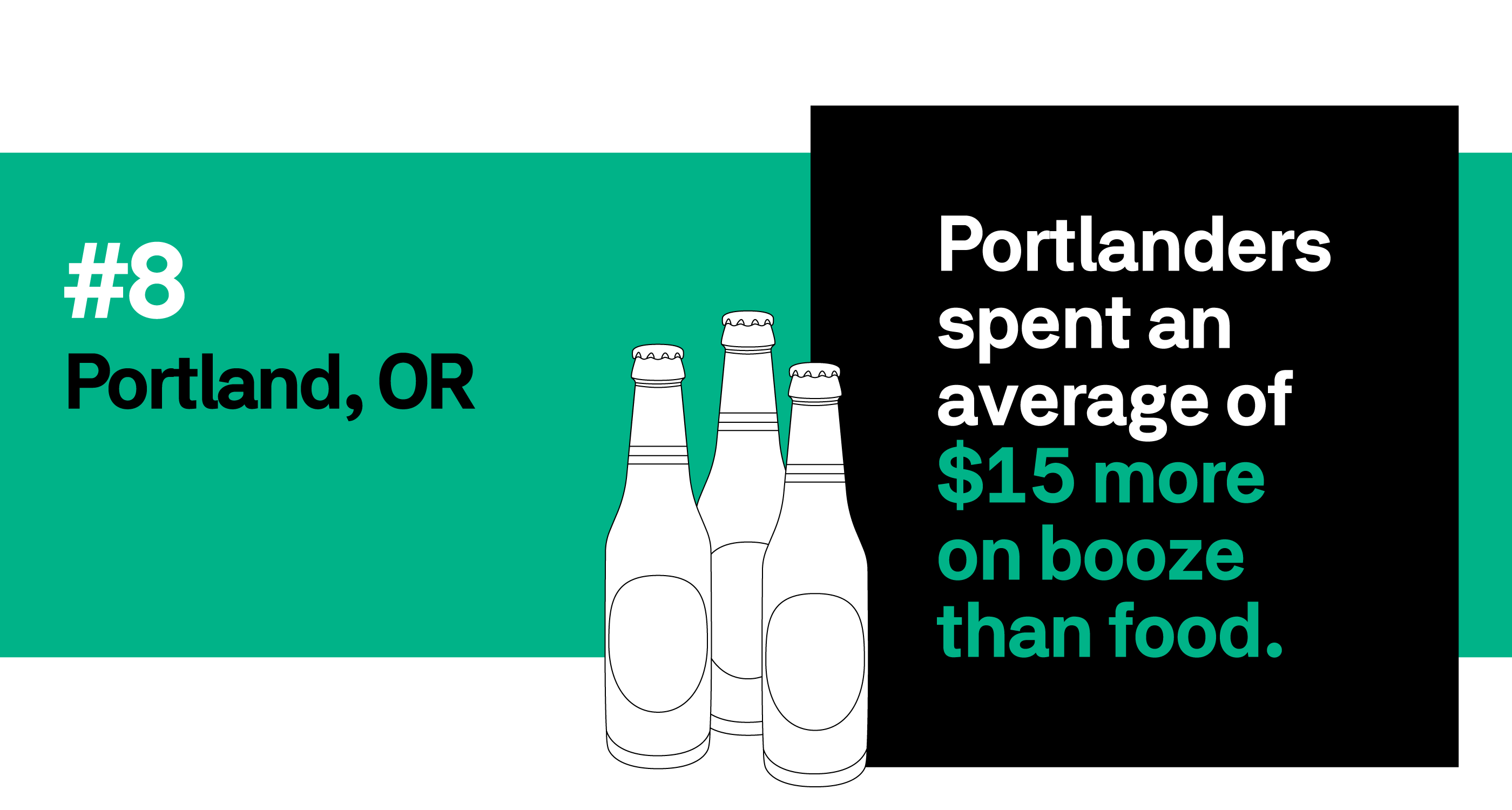 Portland might not be thought of as a big drinking town—but that may need to be reconsidered. During last year's game, Portlandians spent an average of $15 more on alcohol than they did on food. Food orders were filled with favorites like chips and guac and burrito bowls, and they also hit up McDonald’s pretty frequently as well. (20-piece chicken nuggets, anyone?) But for a town without a major NFL team, it’s clear that the game itself is what draws in viewers. Or maybe Portland just really likes commercials. 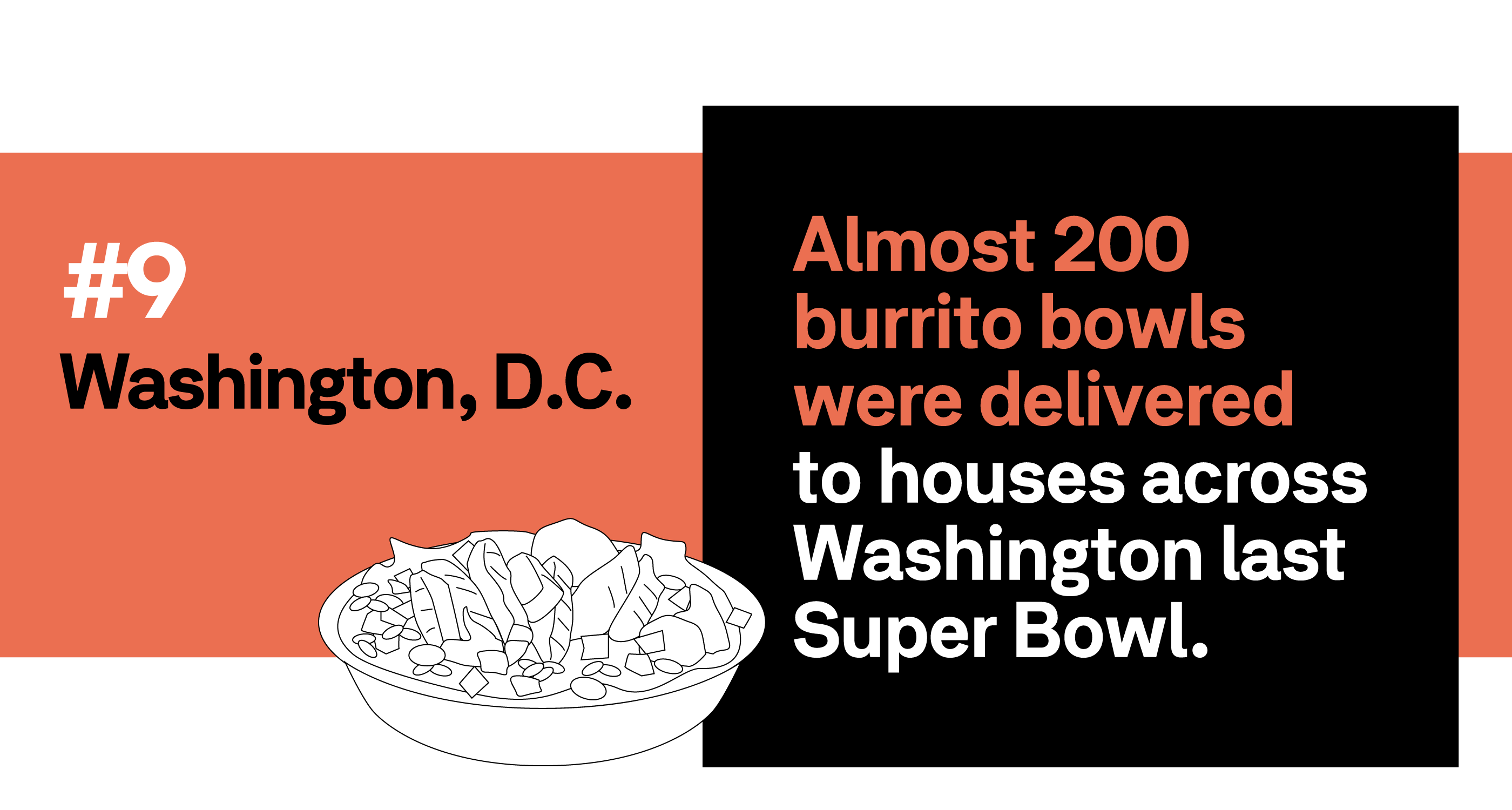 Once known as the Boston Braves, the Washington Redskins were founded in 1932 and made their way to Washington D.C. in 1937 where they have been ever since. Fans of this storied franchise weren’t afraid to spend cash at their get-togethers, laying out about $10 more on alcohol than they did on food per order. Party attendees were likely to see a lot of fries, burgers and burrito bowl fixings spread out for their enjoyment. 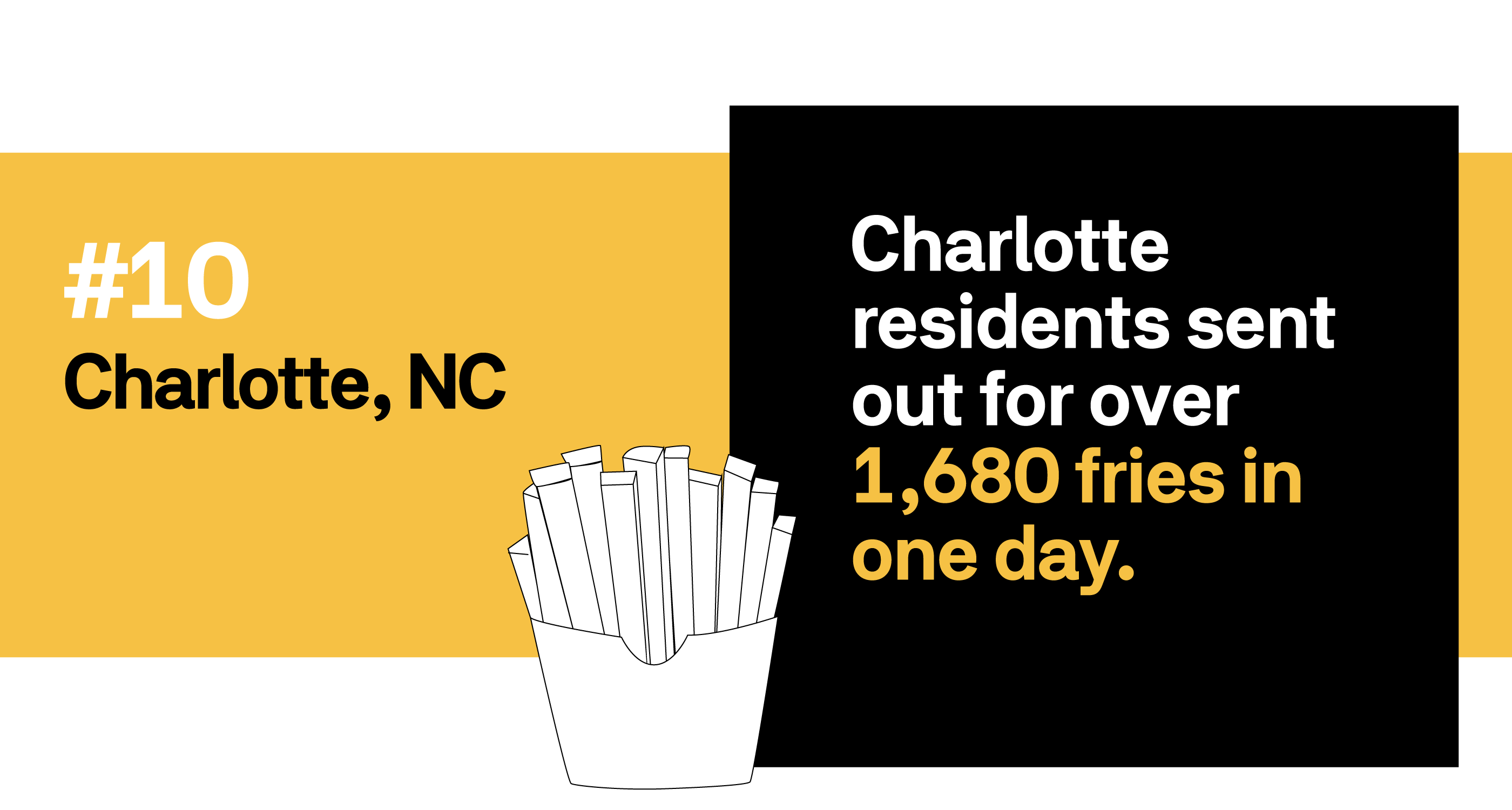 Even though the Super Bowl championship has evaded the Panthers since their formation in 1995, that hasn’t seemed to stop Charlotte residents from watching each year. Viewing parties in Charlotte last year were often filled with nation-wide favorites like burrito bowls, fries and the famous ShackBurger delivered by—you guessed it—us.

Outside of food, the second most important thing to have at a Super Bowl viewing party is alcohol (this is a nationwide fact, trust us). Although we don’t deliver alcohol to every major city in the US, we wanted to take a look at who is ordering the most out of the cities we do serve. So who orders more drinks than anyone else? San Antonio, Texas took home the spirited crown, spending the most per order last year. But to be honest, part of us wonders how on earth it wasn’t LA after last year's game. 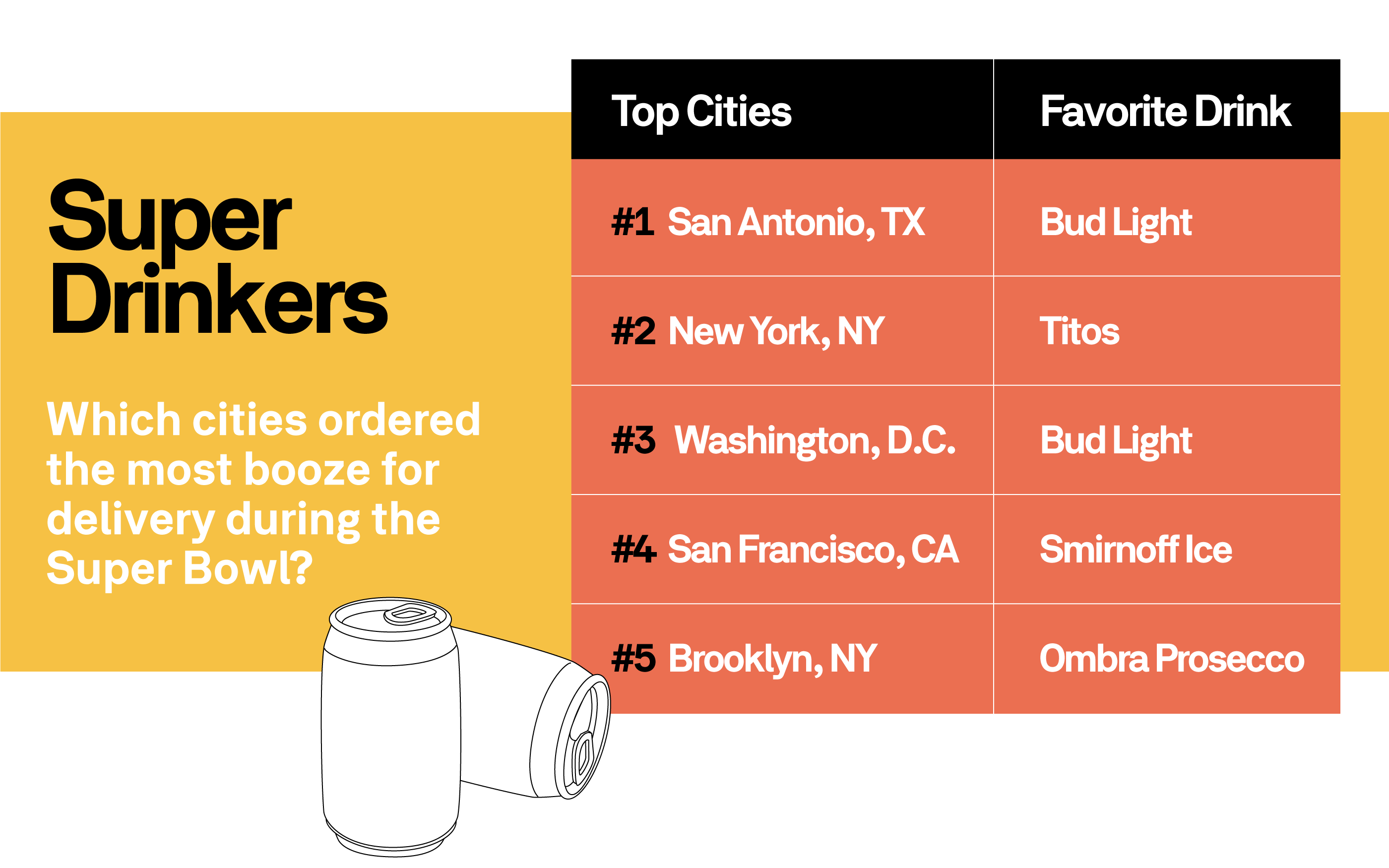 We’ve taken a look at some of the most popular cities of the Super Bowl for food delivery, but during this historic sporting event there were plenty of orders placed outside of this top 10 list. So which merchants dominated parties across the nation? Chipotle, McDonald’s and Taco Bell were some of the craved fast food joints, taking the top three spots for food orders that night. In fact, fast food chains take up 9 out of 10 of our popular merchants list, with 7-Eleven as the one outlier. Orders for soda at 7-Eleven came pouring in throughout the night, probably as a mixer for all of those alcohol orders. 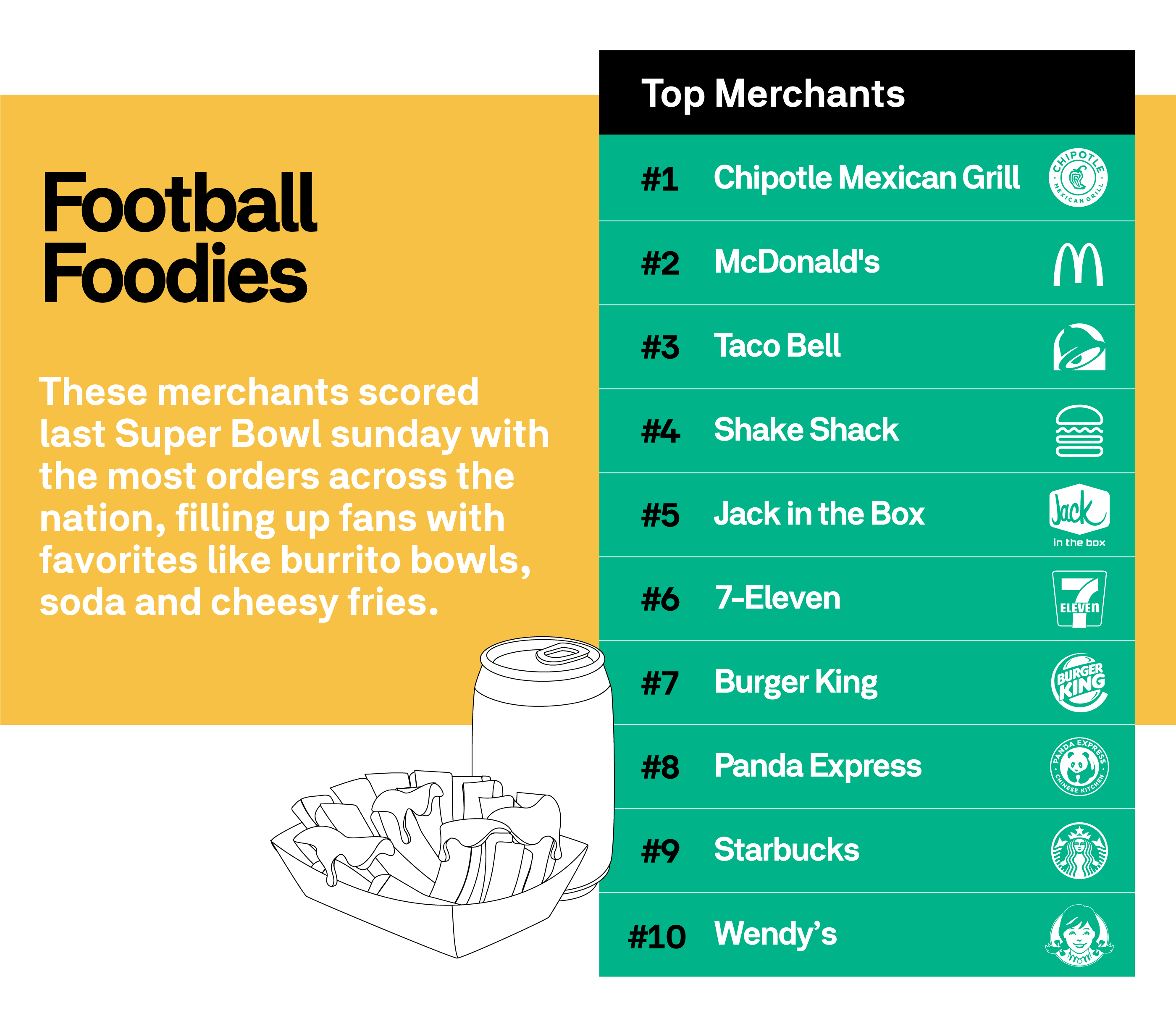 Drinking, eating and watching football are without a doubt the favorite pastimes of most Americans. And what do you get when you combine all those things together? The Super Bowl. With an average of 106 million viewers every year, it’s clear most don’t want to leave their couch (let alone take their eyes off the screen) long enough to go pick up more snacks. And that’s when Postmates saves the day, delivering anything and everything at just the click of a button. Don’t see your city on this list? Well, that’s up to you to change.