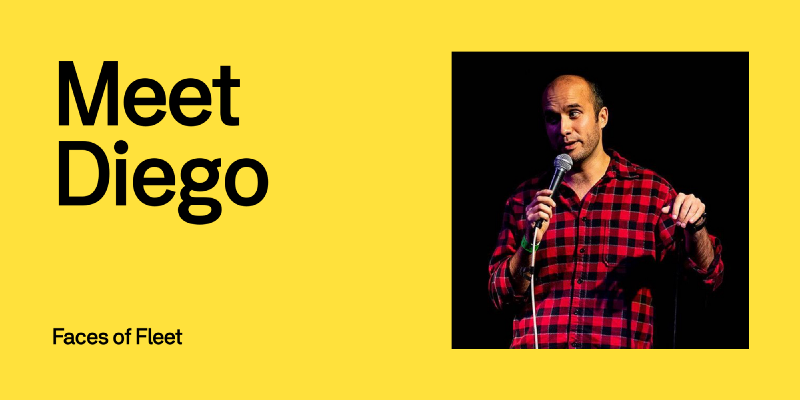 To make some extra cash, he delivers for Postmates.

“I remember having an awesome weekend in Kansas City working a local comedy club,” Diego said.

“By the end of the weekend, I felt like I really knew my way around. Postmates is great for discovering different parts of cities you wouldn’t otherwise see, even in your own town. I’ve found some really great places to eat in Detroit that way.”

Diego loves that Postmates is in every city and he can deliver pretty much anytime and anywhere. As a comedian, he needs extreme flexibility in his work, and Postmates provides him just that.

“In comedy, there’s a lot of pressure to compete, to progress forward quickly, and never stop moving. It can feel like a lot,” Diego said.

“It’s easy to get down on yourself and to want more, more, more. Professional comedians told me that it would take 10–15 years to really get going, let alone find success. I had to learn to surrender to the process and enjoy the work rather than become anxious or discouraged. Now I think, if I really want to do this for the rest of my life, then what’s the rush?”

Comedy takes true patience and dedication. There is a tiny window of action compared to the prep and build up. In comedy, there is no rushing.

Diego is passionate about comedy. He is incredibly dedicated, patient in his work, and carries these lessons and qualities beyond comedy and into his relationships and day-to-day experiences.

Make each moment count, be persistent, find your passion, take your time on the journey and enjoy the ride.