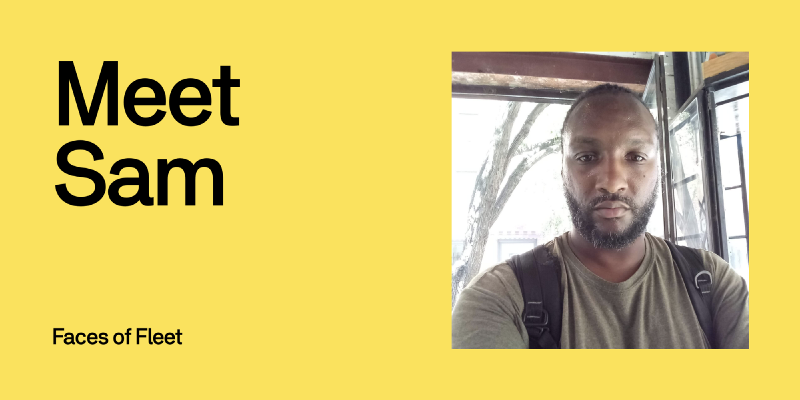 Born and raised in northern New Jersey, now residing in the South Bronx, meet Sam. Sam is a jack of all trades, having worked in community relations for the New York Fire Department, as a tax pro for Jackson Hewitt, and currently as a fitness and nutrition student. To top it off, he’s also a Postmate.

He loves hip hop and lives in the birthplace of hip-hop music.

“Hip hop music and I grew up together,” shares Sam. Rising from the South Bronx are revolutionary hip hop artists like DJ Kool Herc, Grandmaster Flash, Kool Keith, Slick Rick, Big Pun, and KRS-One. Born and raised in the Tri-State area, Sam loves that there is something always going on in New York. You never know who you will see, meet, or experience. The possibilities of exploring the city, especially by bike, are endless.

“I’d rather make one righteous dollar on my level than make a million dollars spittin’ rhymes for the devil.”

Sam became a Postmate after going through a significant life transition that left him in a homeless shelter and in need of a job. Sam was looking for something to help him get back on his feet, and Postmates provided just that.

Postmates was able to give Sam the independence and freedom he needed in that time of his life. He enjoyed riding his bike while delivering, opening him up to different parts of Manhattan, and helping him explore new destinations that he may not otherwise have the opportunity to visit.

For Sam, Postmates helped him come out of a stressful situation and rise above his hardships. Postmates gave him a way to get back on his feet after a tough time in his life, and provided stability and push forward that he needed. Sam’s future goals include becoming a certified personal trainer and opening his own gym.