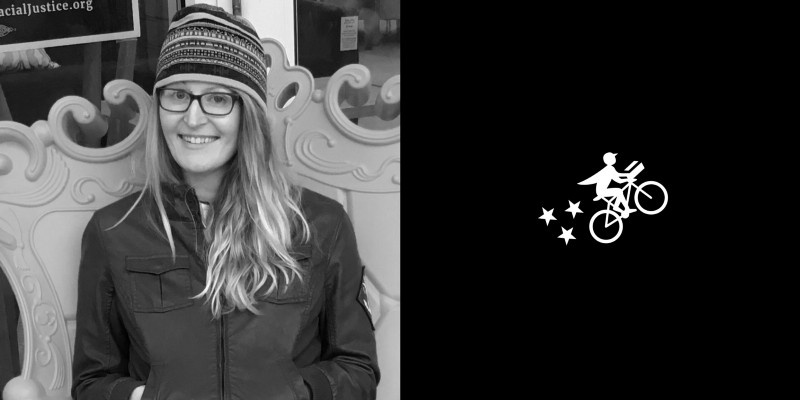 This is the second installment in a 12-part series where we uncover the stories of the people behind your deliveries.

Sandi Violet has a quiet knowingness about her — not unlike a sage aunt you would seek advice from. Except Sandi isn’t your older aunt, she’s more like your sister who has lived a life fuller than most people do in their lifetime.

Originally from a small town two hours northwest of Seattle, Port Townsend, Sandi had an appetite for something bigger than what the quaint Pacific Northwest town offered. Rather than quenching her thirst for adventure with the type of textbook rebellion ubiquitous with young adult novels , she did something that surprised her peers, even surprised herself — she joined the Air Force.

A chance meeting with a Navy recruiter on her high school campus (admittedly only attended because her friend had a crush on the recruiter) was the perfect answer to the question that loomed ahead: what does life after graduation look like? Not quite ready for college, but ready to get out of dodge — the military seemed to provide everything she was looking for.

Joining the military is a big decision — often made after years of intentional planning. That wasn’t the case for Sandi.

“I think I was a little nervous, but more excited. I jump into things with my feet first. I went in blind, making it harder to chicken out.”

That mindset served her well in the years that followed.

Joining the Air Force in 1999 meant being up close to the events that forever changed the lives of Americans everywhere: September 11, 2001. It’s likely that the mention of that day alone takes you back to where you were when you first heard the news of the atrocities committed against our country; and that sinking feeling is understandably amplified for Sandi, who remembers the day and those that followed with clarity.

“When it happened, I was at work in the break room, watching. That same day, they shipped a bunch of people overseas somewhere. I was young enough that it was all very surreal. ”

In 2002, she would be the one to head overseas. Sandi was deployed during Operation Enduring Freedom and stationed at Masirah Island in Oman where she worked as a diesel mechanic on the many specialized vehicles necessary to carry out their mission.

Even with the challenges and hardships endured, she looks back on this time with a certain nostalgia and fondness. There’s something to be said for the very real bond formed with those who you experience something of that magnitude with.

Following her return to the states, she went on to join the honor guard where she played a pivotal role honoring the lives and legacy of fallen soldiers. In 2003, she carried out the ceremony for those who lost their lives in the Columbia Space Shuttle disaster.

The transition back to civilian life came with its own unique set of challenges; the plethora of options for seemingly every major decision — from where to live and what career to pursue, were at times overwhelming. Over the years, Sandi has worn many hats, which have probably contributed to that quiet knowingness mentioned earlier. She’s been a Wildland Firefighter for the Department of the Interior, a construction worker where she learned to build houses, and on many occasions a student.

With each move and new town, came a new local university and new major. She depleted her GI Bill in March and is half way to achieving a degree in accounting.

When asked about life post-graduation, she says “I might want to be an accountant. If history repeats itself, I’ll change my mind. I made a commitment to myself to finish this degree. To have a solid skill that pays, and THEN if I decide I want to support myself some other way, so be it. Ultimately I want flexibility in my life. Which is why I enjoy being a Postmate.”

We often joke that the individuals who make up the Postmates Fleet are heroes — heroes who save us from hangovers, dehydration, and having to be in public. Sandi is one of an elite group that truly lives up to that distinction, although she would never admit it.

She is humble personified.

Thank you, Sandi, and all of the veterans of Postmates Fleet- for your service to our country and protecting the freedoms that make this nation great.