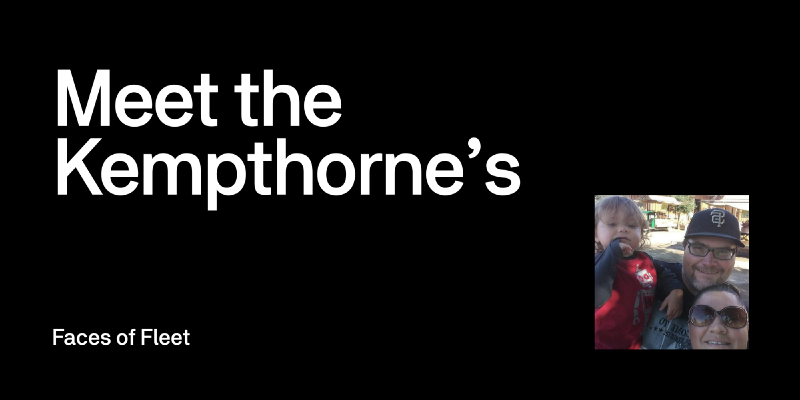 Faces of Fleet — Meet The Kempthorne’s

It’s not every day that you meet a family quite as inspirational and resilient as this one. Through great adversities and — at times — nothing more than the love they share for one another, they were able to overcome situations that most of us can’t even imagine. These are the Kempthorne’s.

“We want to help show that even when times are hard and scary, there is always hope.”

Christina and Charles met in early 2013 and were married a few months later on Easter Sunday. Since then, they have experienced a rollercoaster journey of highs and lows together, with a constant of love, hope, and humanity guiding their way.

Shortly after getting married, Christina and Charles found themselves homeless and living on the streets of San Francisco. These were challenging times for Christina and Charles. They found solace and strength in their community and the compassion found in the hearts of the people surrounding them, and experienced acceptance, openness, and a mutual understanding of the every-day realities of those sharing the same struggles.

“Homelessness can happen to anyone at anytime; count your blessings, be grateful, be generous, and be kind to others.”

While they were homeless, Christina found out that she was pregnant, and the couple spent a large portion of her pregnancy without proper housing. However, with determination and hope, Christina and Charles in time were able to secure housing and jobs that they enjoyed in Sacramento. They settled into their new life and made a point to help others in need, once they regained stability living in Sacramento. Soon after, they welcomed their sweet son Alexander into the world, who Christina and Charles say is “the most awesome kid ever.”

Things were going well in Sacramento for this new family until hardship knocked on their door once again, and Christina’s health began to fail. Christina started to experience frequent and disabling seizures. Doctors recommended that Christina not be left alone, and Charles was forced to leave his job to stay home to care for both Christina and now one-year-old Alexander.

“We’ve had a lot of fun doing Postmates together, and the earnings help us out tremendously.”

Christina has not had a seizure in over six-months, Charles is now back to work, and they have all been living healthy happy lives with a roof over their heads. They are continuing to Postmate when they can. Christina, Charles, and Alexander also make a point to take care of their less fortunate neighbors and to reach out within the homeless community in Sacramento.

“At some point, everybody needs help.”

Christina and Charles are raising Alexander to be a kind and compassionate community member. Alexander is an energetic and joyous 3-year-old now. In addition to playing, learning, and living his best 3-year-old life, he volunteers with his parents and extends kindness and support to anybody and everybody who needs it.