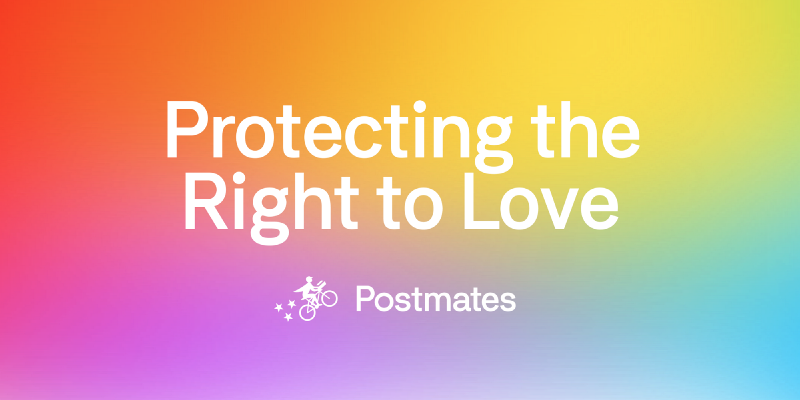 Protecting the Right to Love, No Matter Where You Work

Protecting the Right to Love, No Matter Where You Work

Today the Supreme Court ruled that Title VII of the Civil Rights Act of 1964 protects gay and transgender individuals from workplace discrimination, an outcome that will ensure millions of employees nationwide are protected from discrimination based on their sexual orientation or gender identity. The justices ruled 6–3 and Justice Neil M. Gorsuch wrote the opinion of the court on the matter.

Postmates released the following statement regarding the Supreme Court’s decision:

“There’s no Pride for some of us without the liberation of all of us, and today’s decision from the Supreme Court upholding the workplace rights of gay and transgender workers marks a momentous step forward standing up for one another, and in the movement for LGBTQIA+ equality. We are inspired to see the Court affirm what we have long known and believed: that the LGBTQIA+ community is entitled to the basic rights and protections every worker in America deserves.

And while today’s decision is an important point of progress, Title VII still does not extend to flexible workers. It is crucial that all workers — no matter their classification — are provided the same anti-discrimination protections so that no person has to live in fear of discrimination because of who they are or who they love. At Postmates, we proudly advocate for the LGBTQIA+ community and expressly prohibit discrimination based on sexual orientation or gender identity. We urge the rest of the gig economy also to adopt this crucial policy and join us in the fight for the advancement of LGBTQIA+ workplace rights.”

As we celebrate both Juneteenth this week, alongside Pride Month, we know black trans people in particular need our support right now; despite progress in the fight for gay rights, they continue to suffer the potentially lethal consequences of racism and sexism. Learn more about ways to support the intersectional causes here.