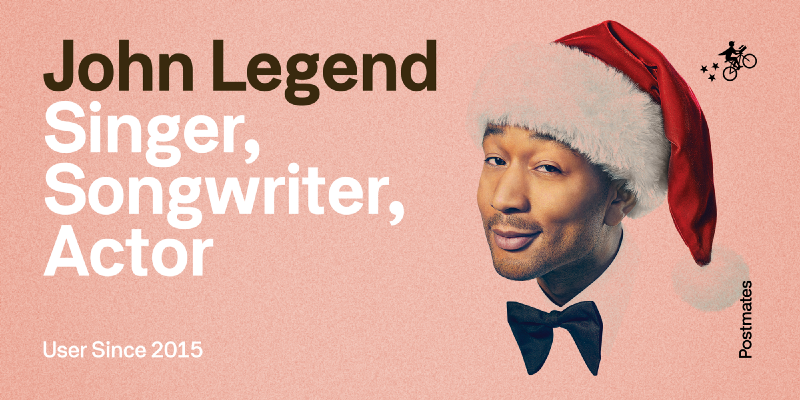 In our holiday edition of celebrity spotlight series “The Receipt”, we gift you with a sneak peek behind EGOT extraordinaire and Postmates’ customer phenom, John Legend. Today, we unwrap his tasty Thanksgiving and Christmas favorites, seasonal orders, and holiday traditions with Postmates.

John Legend’s newly released holiday album, A Legendary Christmas, is in stores and bringing music to your ears while we bring your holiday favorites to your couch. He kicked off his nationwide tour on November 15th and will be on the road until December 30th — using the only delivery app he trusts to keep up with his holiday and music travel plans: Postmates.

John has placed orders in 27 different cities and from 212 different stores. With more than 3000 items delivered in a total of 657 orders, John knows Postmates is there anytime, anywhere.

If you ask John who is #BetterThanSanta, he’ll tell you it’s his Postmate, of course. The one that’s bringing him his Christmas Eve go-to food… from McDonald’s. (Fact: John and Chrissy have postmated McDonald’s on Christmas Eve two years in a row.) For the day before Thanksgiving, another tradition runs in the family. Postmating pho for dinner. “We are so used to traditional Thanksgiving meals, we just want to do something different for the day before.” And who doesn’t want some pho? “It’s perfect,” says John.

It’s not always about the biggest orders. John uses Postmates for the little things too. Like the time he ordered a single pot pie.

Or the multiple times that John has ordered A1 steak sauce. John also explains that “Chrissy insists on having A1 for her steak no matter how blasphemous that is to any steak people.” Just keep your phone close in case your wife might end up accidentally ordering 25 bottles of A-1 steak sauce, like Chrissy did. It’s just what happens when the person you love has cravings and writes cookbooks.

And when John’s finished having fun at a legendary New Year’s party, there can only be one perfect finish: wings from Hooters for Chrissy. Because hey, why not earn that New Year’s kiss with a little help from Postmates.

We’re a month away from the end of the year and we’re pretty sure which part of Santa’s list we’ll be on. But whether you’re naughty or nice, be sure to Postmate John Legend’s new album, A Legendary Christmas. Visit Postmates.com or open the app to order with Postmates.