Meet Frank Miceli of Miceli’s Restaurant and Tara Punzone from Pura Vita. We paired them up without ever meeting each other and they discussed everything from adjusting to outdoor dining to a carbonara without egg, cheese, and bacon.

Frank Miceli: I own Miceli’s Restaurant. We have two locations, in Hollywood and Universal City. My parents started the business in 1949 and it’s considered the oldest Italian restaurant in Los Angeles. Until someone tells us different, I'm going with it.

The story my father tells is that he brought pizza to Los Angeles; it wasn’t even around back then. When people ask, “Is it New York or Chicago-style?” I always tell them, “Why can't it be Los Angeles-style?” We've been doing it our way for 71 years. We’re not copying anyone.

Tara, as you know, it's a tough business. Especially now. 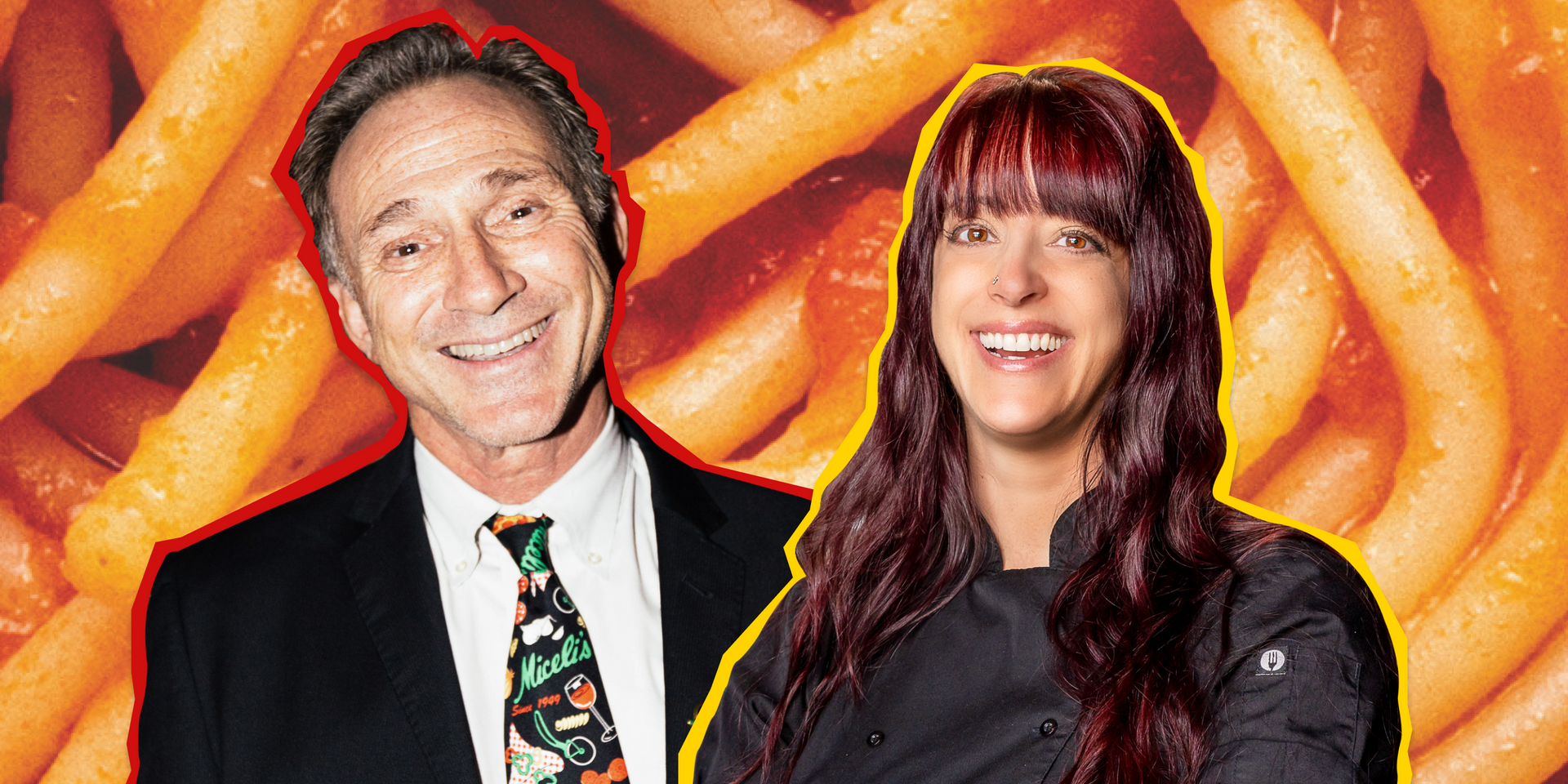 Tara Punzone: I would imagine that it’s tougher now than it might ever have been before.

Frank: No kidding. This is one of the toughest times that we've ever gone through.

Tara: What are you doing to navigate the situation?

Frank: In Hollywood right now, the unfortunate thing is we can only do takeout and delivery. We're not allowed to have in-house dining and we have no room on the sidewalk or in the street to do outdoor dining.

We’re hoping that our regulars come back and help us out. That’s one thing my family and I are doing—we're going to all of the local restaurants that are family-owned as opposed to the chains. The independent restaurants have become our staples. Tara, you're independent too, right?

Tara: Yup, it's just me and my friend.

I'm from New York. My grandpa owned a sandwich shop in Brooklyn and I wanted to be just like him. But I turned vegan at a very young age, I was 10 years old. Very long story short, throughout my whole childhood, and adolescence, and after, I told my family I was going to open the first vegan Italian restaurant.

I never thought in a million years it would be possible, but sometimes seemingly impossible things become possible. I found this amazing location on Santa Monica Boulevard and we threw caution to the wind and took the biggest risk of our lives. It was a major success, right from the beginning.

And then in March, the switch just turned off.

We have a lot of really amazing loyal customers who come all the time and get takeout and delivery and they’ve been keeping us above water.

I came up with 10 different ridiculous solutions that I never thought would be allowed. But with the permission of our neighboring businesses, we now have eight tables on the sidewalk and it’s literally saving the business. It's making that much of a difference. 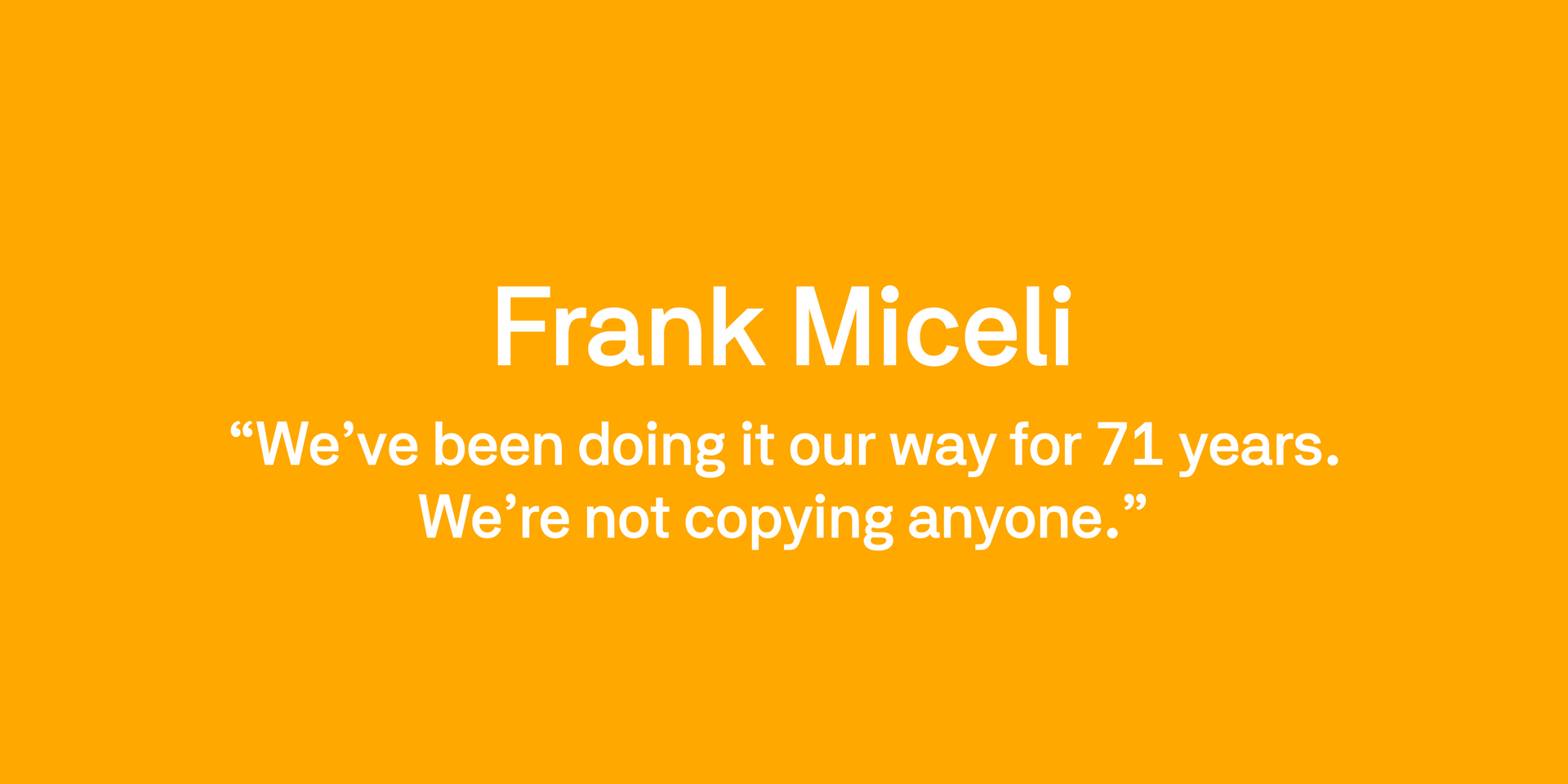 Postmates: What is it about LA's food culture that makes it the place you want your restaurant to be?

Frank: Tara, you should answer that because I only have one opinion. I was born and raised in Los Angeles. I don't know what it would be like to open a restaurant anywhere else.

Tara: There was an amazing food scene in New York. For the better part of my life, I was immersed in it. And it was fun and it was community and it was competitive.

There are a handful of real Italian restaurants here in LA, but there's not a neighborhood that represents Italian identity and there's a lot of people who are culturally Italian. Coming from New York, there's so many of us that it's almost boring.

So being in LA, it's more like ‘Oh wow’. It's a novelty. People are so interested in the traditions and things that my family has done. I find that really interesting because it's sharing my culture with a group of people who didn't experience it as kids, like almost everybody I grew up with in New York did.

Frank: What generation American are you?

Postmates: What do you consider your restaurant’s signature dish and why?

Tara: For us, it’s the Carbonara. That dish is, by leaps and bounds, the thing that people hear about, drive really far away to eat, talk about constantly. People come in six days a week just to eat it.

Traditionally carbonara is egg and cheese and bacon. But I make my carbonara sauce with macadamia nuts, cashews, and avocado. The avocado is the thing that makes it eggy and the nuts are what make it fatty and cheesy. The ‘bacon’ is smoked shiitake mushrooms.

One day I had this dream that I made it. And I literally went into work and just did what I did in my dream and ran it as a special and it's been the best-selling thing on my menu ever since.

Frank: Yeah, I was curious. When you said carbonara, I thought well she needs the bacon, the eggs, the cheese. How’s she going to pull this off? But that sounds really good. You’re Southern Italian. What part? 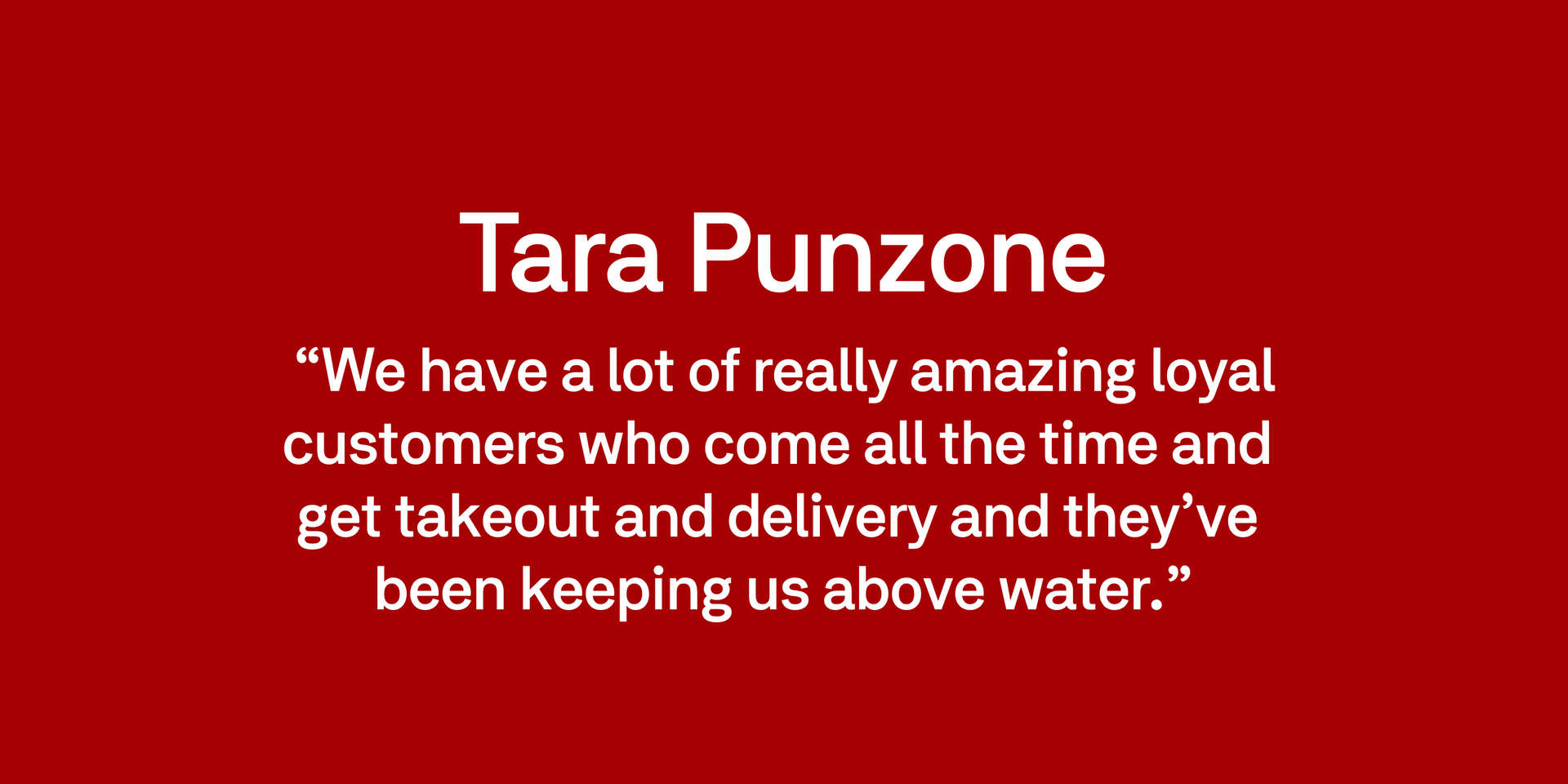 Frank: My family's from Sicily, Monreale, just outside Palermo. Our restaurant’s signature dish, I actually had it for lunch today. Lasagna. I love our lasagna. There’s just something about it. That really is comfort food.

Postmates: Frank, what do you make of the new vegan and gluten-free trends in Italian cuisine? Are you embracing it?

Frank: My daughters are vegetarian, bordering vegan. For dinner, I’ll want a steak. And they want tofu and it kills me sometimes.

My niece is gluten-free and there are actually a lot of things that we've looked into at the restaurant to try and make some items vegetarian. Look, I’m not a pro at it. I don't know how to do vegan stuff like Tara.

Tara: It's not easy.

Frank: I know! We do a gluten-free flatbread as opposed to a pizza. Of course, one time we got confused and a customer that wanted gluten-free got the regular pizza. So we said, we need to make them look different. We try, there is just so much I don’t know. There is a niche for it, as Tara is finding out. We are constantly trying different products, but we haven’t followed through enough because people aren’t coming to Miceli’s for that. They’re coming to us for what we’ve done for 71 years. 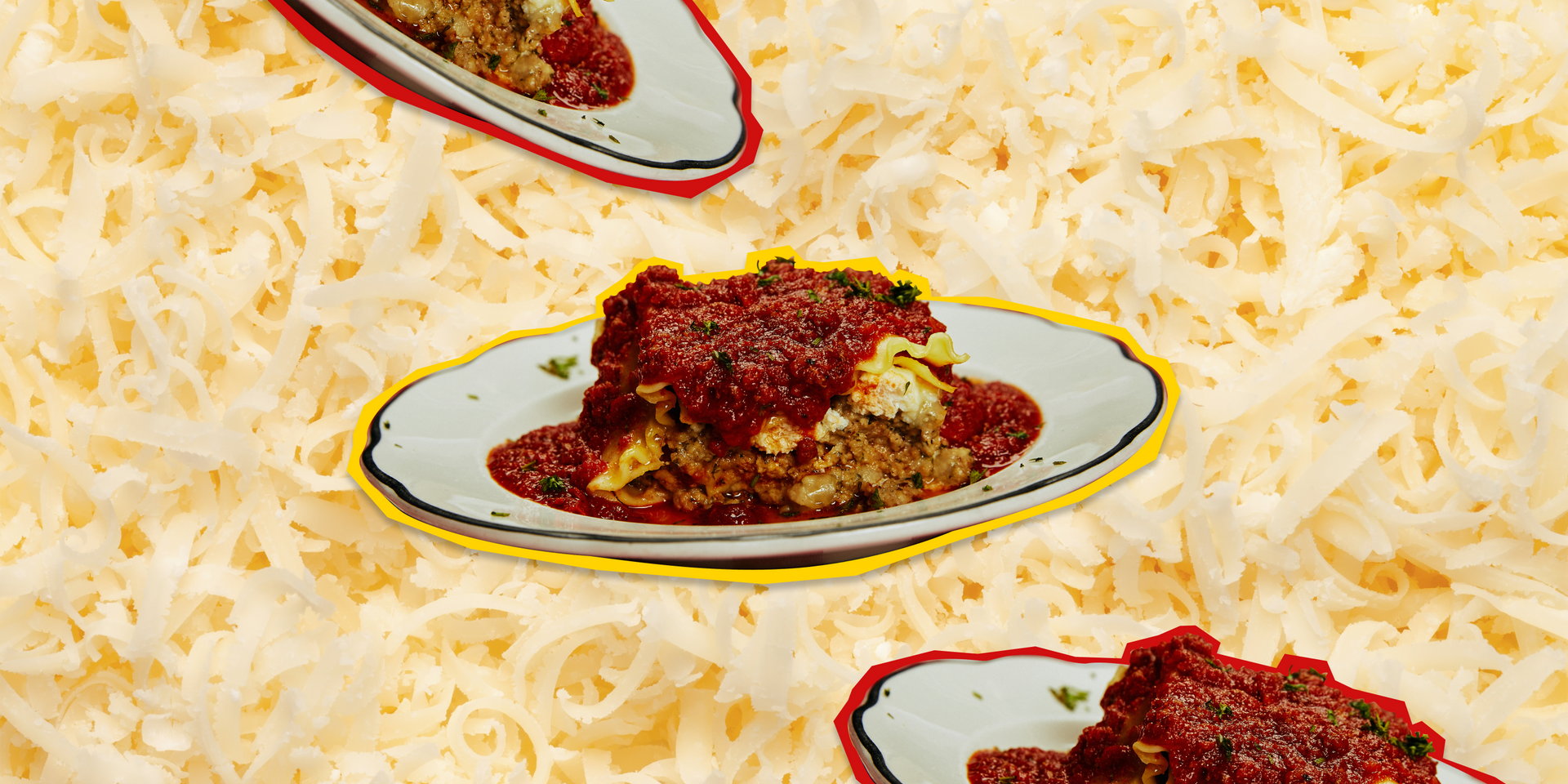 Postmates: Tara, what would you say to someone who isn’t vegan and is about to try vegan Italian food for the first time?

Tara: There are actually a lot of people who come in and have no idea they're at a vegan restaurant. I would rather you have the experience and enjoy the food and then hear the word ‘vegan’. ‘Vegan’ isn’t written on the menu anywhere because it's a turnoff to people who aren’t vegan.

And that's very intentional—I don't put it in people's faces because there are no judgments. You don't have to be vegan. I don't care what your politics are. I just want you to eat clean, healthy food. If somebody knows that it's vegan and they're skeptical, and there's certainly plenty of that, I just hope they have an open mind. This is food I grew up eating and it took years of my life to get it to be almost identifiably vegan.

Like if Frank came in to eat, he’s not going to get a fake steak. Which is what a lot of vegan restaurants do and then non-vegans say “This doesn't taste like steak,” and they're disappointed.

Frank: Where on Santa Monica Boulevard are you?

Tara: Between Sweetzer and Harper.

Frank: That’s so interesting, I love what you’re doing. When all the dust settles, I’m going to take my family to your restaurant and tell them to order whatever they want and not tell them it’s vegan. I have no problems delving into something new.

Tara: I mean, if it tastes good and you're putting love into your food, it’s going to show. When you’re eating pasta or pizza, meat doesn’t really have to have that much to do with it. I think it's really more about cheese.

So there's less room for disappointment when you have in your head that you're not about to eat a steak, you're going to eat a dish of pasta or pizza. 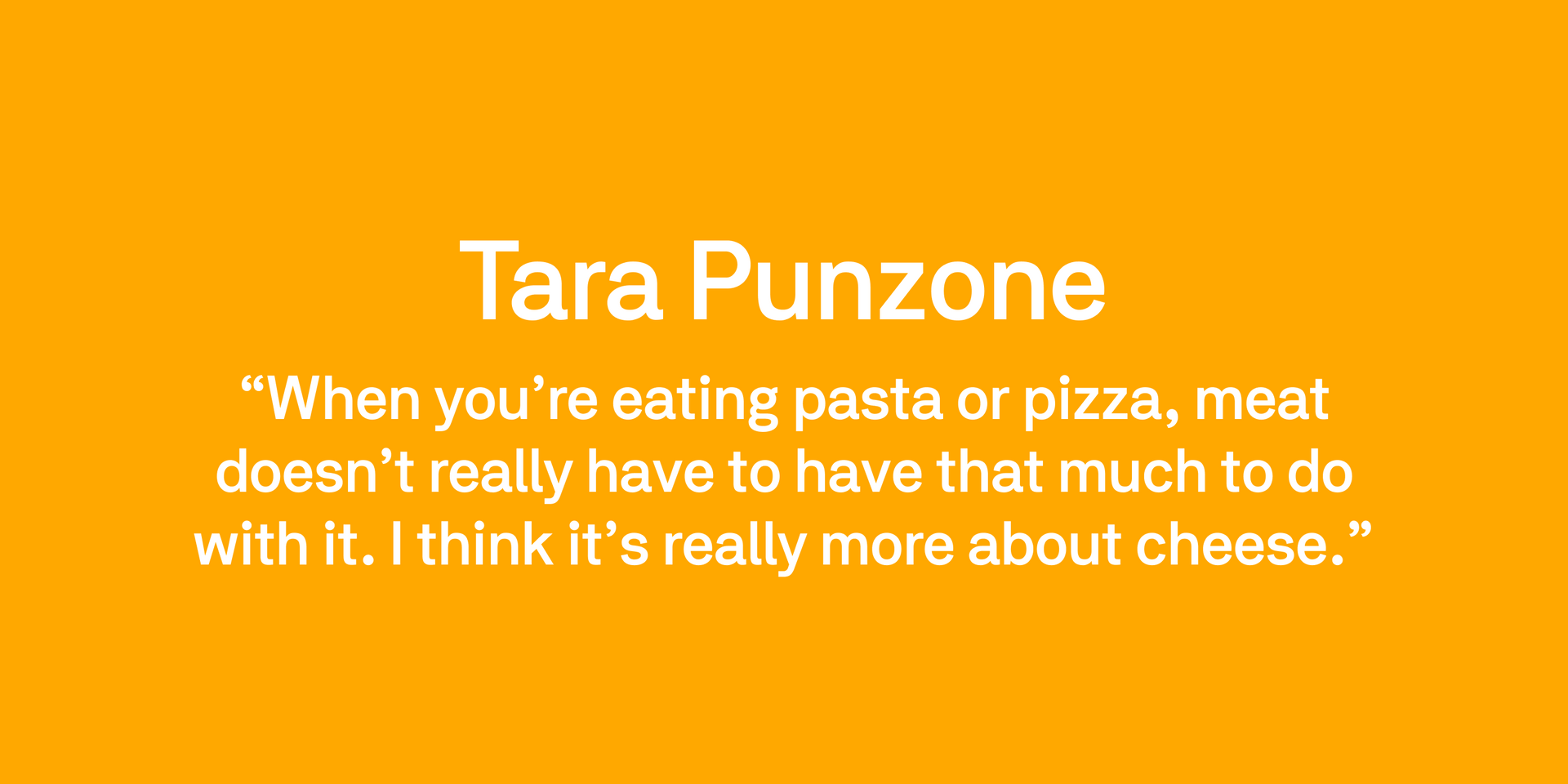 Frank: There’s a place in Brooklyn, have you been? Spumoni Gardens. When you walk in, you get a square, and a slice, and a pint.

Tara: Spent my whole childhood there. That was my favorite place in the whole world. If anybody was ever upset, if we were celebrating, whatever it was, it was Spumoni Gardens.

New York has its staples—that's what's really cool. Some restaurants that have been open for over 75 years. At two years old, I'm still just learning. So talking to somebody like you is awesome. I hope one day, I'm the you in this conversation and I can be talking to somebody who’s just starting out. It's amazing to know that it's possible to stick around for that long. 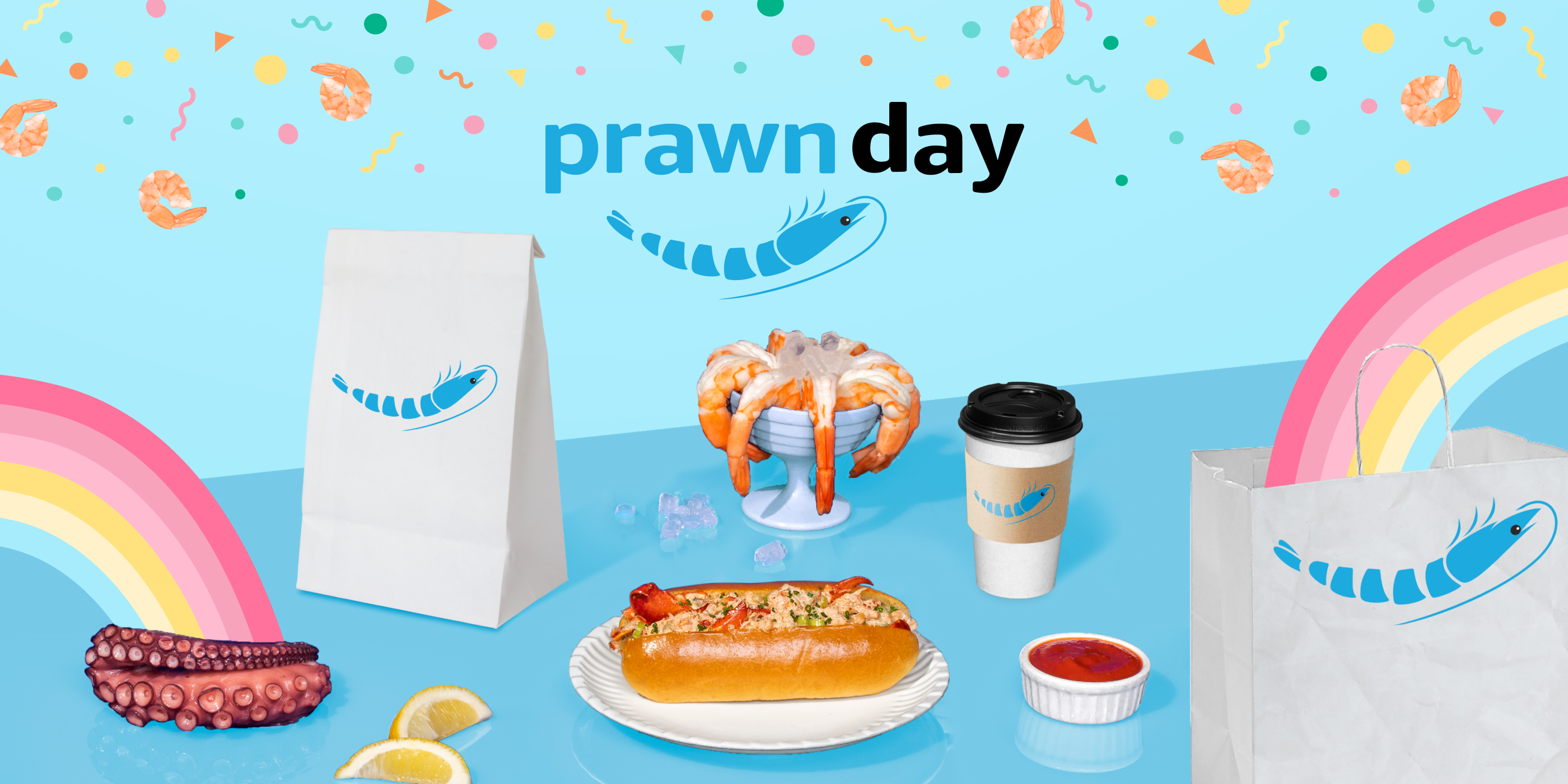 It’s the biggest online shopping event of the year: Prawn Day. From morning ‘til night, Prawn Day is peeling back all sorts of savings on Postmates. 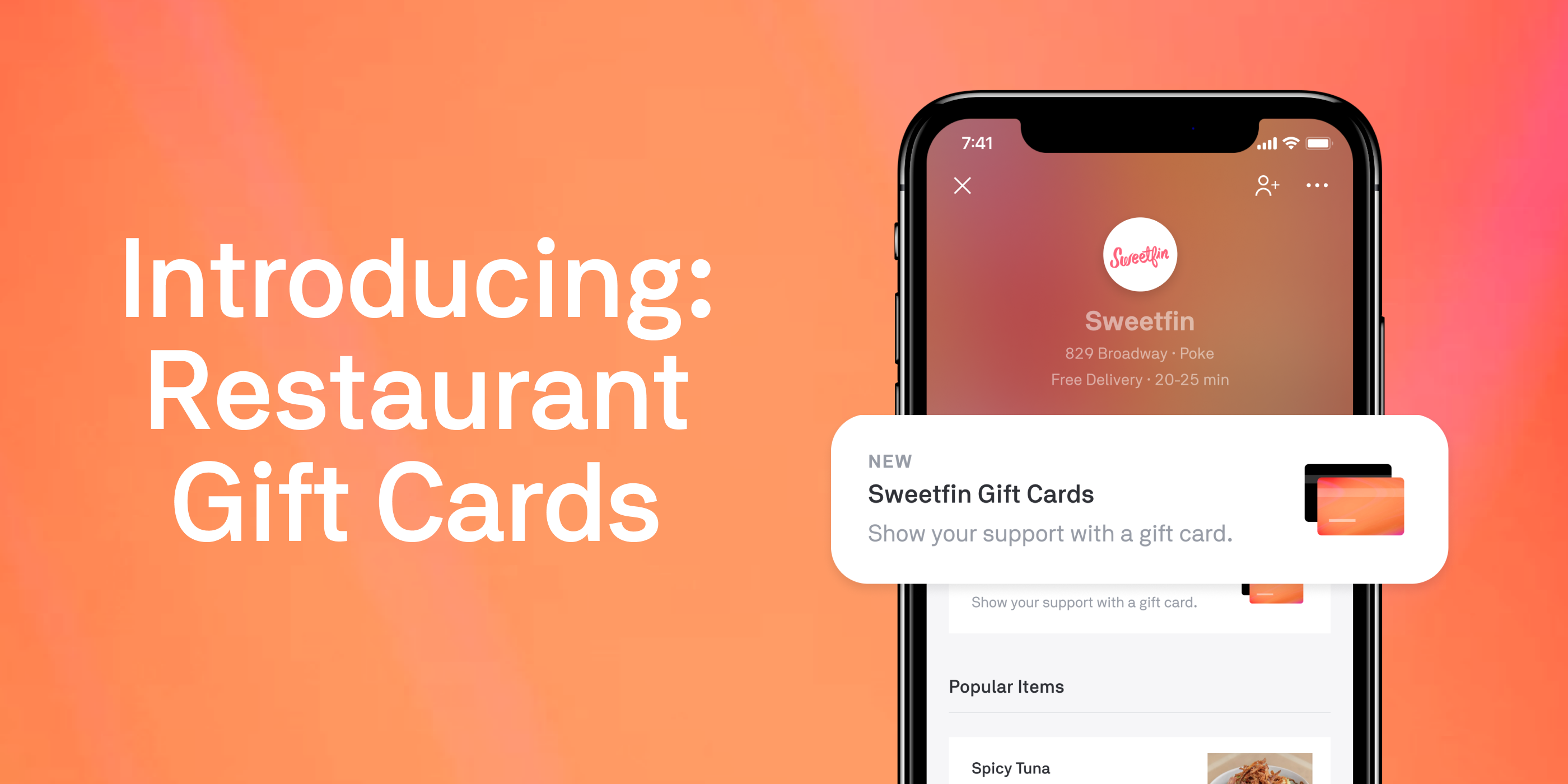 A new and easy way to support restaurants in your neighborhood. 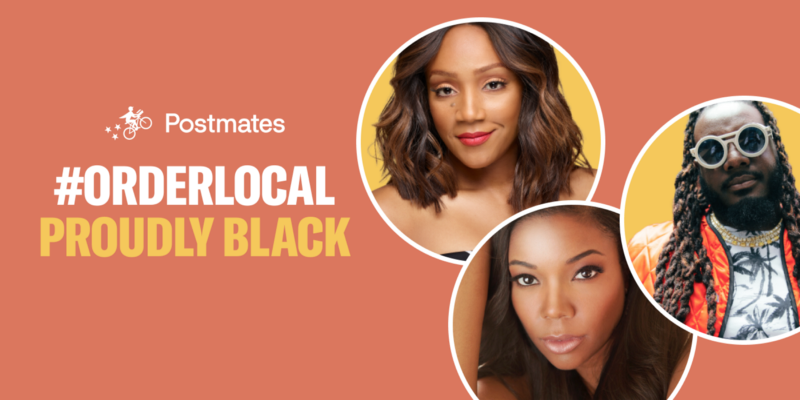 We’ve teamed up with our favorite artists, actresses, and comedians to shine a light on their favorite Black-owned restaurants from their…